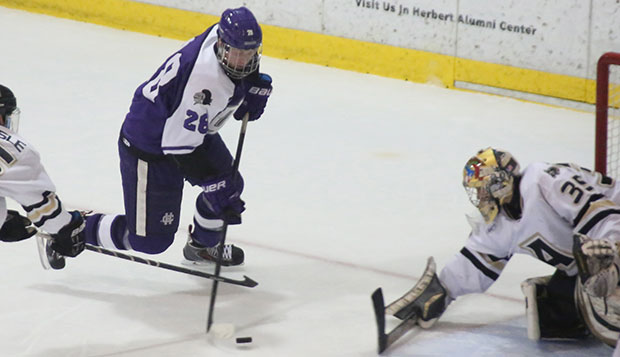 Grant Garvin looks for a shot as he maneuvers the puck through the crease in an NCAA Division I game last season.

Grant Garvin's freshman season of NCAA Division I hockey at College of the Holy Cross near Boston left him longing for something more.

Garvin, a 6-foot, 3-inch, 205-pound center and left wing for the 14-22-3 Crusaders, hopes to make an immediate impact on the ice next year as a transfer to Liberty University's ACHA Division I men's hockey team, which finished 29-6-3 and ranked No. 9 in the nation last season.

"I really love the game of hockey," Garvin said. "God has given me this ability and I just want to use it to glorify Him."

Like Garvin, former Naval Academy Head Coach and current Fellowship of Christian Athletes' National Hockey Director Rick Randazzo grew up skating on the frozen ponds around Buffalo, N.Y. He suggested Garvin check out Liberty, believing it would provide a better opportunity to develop his game in a spiritually enriching environment.

Garvin jumped at the chance to visit campus during the Liberty Recruitment Camp, held in the LaHaye Ice Center over College for a Weekend in April.

"I was able to spend the weekend with the guys (his future Flames teammates) and it was pretty cool," Garvin said. "I really enjoyed the overall God-centered atmosphere at Liberty.

"Things worked out and I think Liberty will be a good fit for me," added Garvin, who is considering a business major. "I'm super excited, and hopeful. I'm going to work as hard as I can to be the best player I can on and off the ice. I'm ready to try to contribute as much I can."

He will arrive at Liberty in mid-August looking to define his role and strengthen Liberty's rotation on the front line.

"We are excited to add Grant to our lineup," Flames Head Coach Kirk Handy said. "He will add size, speed, skill, and leadership to our forwards."

That was when he established contact with Randazzo, participating in and eventually assisting with various FCA clinics.

This summer, besides helping to coach at an FCA camp in Buffalo, Garvin will return to a farming job in nearby Brant, N.Y.

After a hot summer on the farm, it may take him a few weeks to readjust to hockey life, acclimate to the frigid temperatures inside LaHaye, and to warm up to a new team this fall. But he will no doubt have the work ethic needed for a productive first season with the Flames.

"I'm more of a power forward, but I can score goals and do the dirty work if it's needed," Garvin said.

Liberty opens its 2014-15 schedule Sept. 19-20 at home against Navy, which ended the fourth-seeded Flames' season with a 4-3 overtime upset in the second round of the ACHA DI National Championships, March 7 in Newark, Del.