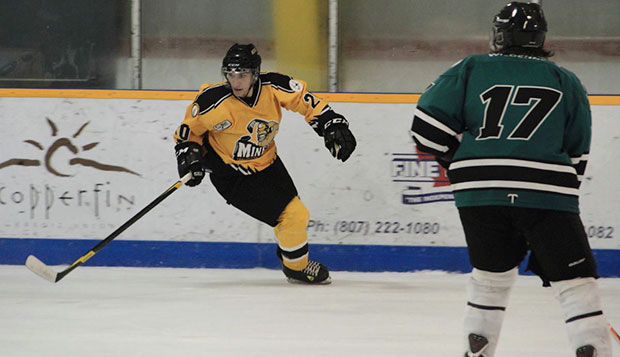 Paul Lamoureux played his last season of Junior "A" hockey with the English River Miners, an expansion team in the Superior International Hockey League in Ontario.

The only times Paul Lamoureux has ventured south of the border from Canada have been on road trips with his Junior ‘A' hockey teams in the Superior International Hockey League.

Starting in August, he will become a full-time residential student at Liberty University, playing primarily left wing for the ACHA Division I men's hockey team.

"I got the opportunity to come down for College for a Weekend (CFAW) in April and that was the longest time I've ever spent in the United States," Lamoureux said. "I wasn't too sure where I was going to end up after this year so when this came up, I saw it as a great opportunity to pursue my education as well as hockey. It's going to be interesting."

For Lamoureux, whose name means "loving," his impression of Liberty's campus and facilities was love at first sight.

"It's beautiful, on a beautiful setting in the mountains," Lamoureux said. "Everything's brand new and the (LaHaye Ice Center) is really clean and organized."

During CFAW, he made a positive first impression on the Flames' coaching staff.

"They liked my ability to create in the offensive zone," Lamoureux said.

Lamoureux's versatility was another factor in his favor.

"He can play in a lot of different situations, both as a center and a winger," Liberty Head Coach Kirk Handy said. "He's someone who brings a speed and skill element to his game. We are excited to have Paul on board. He's definitely going to be able to chip in offensively."

Lamoureux is from the same town in the Canadian province of Alberta as Flames junior forward Lindsay LeBlanc and played for the same team, the Sherwood Park Crusaders, three seasons after LeBlanc left for Liberty. This past year, Lamoureux was a starting left wing for the English River Miners, a first-year expansion team out of Ontario.

"It was a good experience," Lamoureux said. "I've never been a part of a new franchise before. Everyone was really excited and the atmosphere was pretty electric. It was fun to be a part of."

However, he is looking forward to transitioning to the style of hockey played in the ACHA, where he can utilize his speed and freewheeling style more.

"It's going to be a lot faster and it fits my game more, so I'm definitely excited about that," he said. "Also, the rink is bigger behind the net and that gives us more room for offensive creativity."