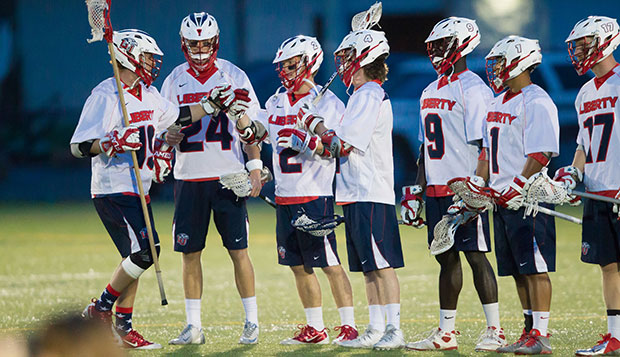 Members of the Flames take the field before their first meeting with Virginia Tech, a 10-8 regular-season-ending triumph April 18 at the Liberty Lacrosse Fields, which gave them the No. 1 seed out of the Northwest Region for the SELC DI Tournament.

"Virginia Tech played a great game and they deserved to win today," Flames Head Coach Kyle McQuillan said. "They're a well coached team and they played much better than they did the last time (a 10-8 regular-season-ending victory by Liberty over its Northwest Region rival). It's tough to beat a good team twice in the same year and they got the win when it mattered most. They're going to go to California (site of the MCLA Division I championships) and represent the SELC well."

The Hokies (14-3, ranked 23rd in the latest MCLA DI poll) scored three goals in the final two minutes of the first half, breaking open a 6-6 tie.

Liberty (14-4, ranked 22nd) appeared content to hold for the last shot, trailing 7-6 with more than a minute to go. But the Flames were signaled for stalling before Virginia Tech freshman goalie Bryan Cooper saved a running shot by sophomore midfielder Brett Bernardo. Cooper started a quick counterattack that senior attack Davis Mayberry finished with a point-blank score 11 seconds before halftime.

Things went from bad to worse for Liberty on the ensuing faceoff when the ball got loose and rolled toward the Flames goal before junior attack Joseph Rittenhouse picked it up and put it away over drawn-out goalie Ethan Kamholtz (10 saves).

"Virginia Tech will force you to make mistakes," McQuillan said. "They did a good job of stopping the bleeding and taking advantage of mistakes on our part. We committed two or three or four mistakes right in a row and it was a big momentum swing going into halftime."

Early on, it looked like it was going to be Liberty's day as the Flames broke open a 1-1 tie with three straight scores in a three-minute span late in the first period. Sophomore SELC DI Player of the Year and SELC DI Tournament Offensive MVP Ryan Miller (three goals) sparked the attack.

"Ryan Miller has had one of the most dynamic and special two years in MCLA history," McQuillan said, noting he is already more than halfway to becoming the top career point scorer in the nation.

Senior midfielder Derek Haywood pushed Liberty's lead to 4-1 with 1:30 to go in the first period, fighting off a Virginia Tech defender with a resilient run through the right crease before pocketing a short shot into the top left corner of the net.

Hokies senior midfielder Nick Fletcher stopped the Flames' scoring run with a bounce shot from the right with one minute remaining before Liberty sophomore Charles Fianko won the ensuing faceoff and found senior attack Kurt Tobias on the left side, where he sent a low submarine shot into the bottom right corner of the cage past Cooper to extend Liberty's lead to 5-2.

"In the first quarter, we did everything we needed to do," McQuillan said. "Virginia Tech fought their way back into the game and once they got back into it, they built some momentum and we were never able to take it back."

The Flames also got three goals from sophomore midfielder Bryce Mrakovich, two assists from junior attack Chris Armstrong and freshman midfielder Chad Moore, and one goal and one assist from Bernardo while Fianko won 14 of 24 faceoffs. Moore and Bernardo joined Miller on the SELC DI All-Tournament Team along with senior long-stick midfielder Michael Zumpano and sophomore defender Brandt Grauss.

While he doesn't expect Liberty to receive one of six at-large bids to the MCLA DI Nationals, McQuillan is confident the Flames can return to the SELC final next year and win it.

"Getting as close as we did to an SELC Championship, we're going to use this as motivation," he said. "We're exactly where we need to be and the future is very bright for these guys and the program. Virginia Tech is always a program that's going to be competing for an SELC championship and we're looking forward to seeing them on our schedule every year. We showed we belonged here, showed we can compete, showed we're going to be there every year contending for the championship."