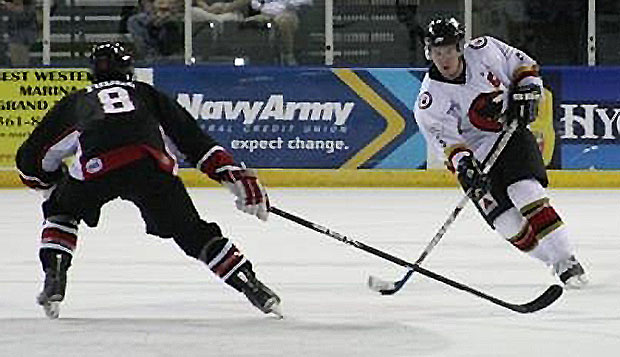 Since playing for the Chicago Steel of the United States Hockey League as a senior in high school, Ben Hughes bounced around with four North American Hockey League teams in Washington State, Texas, North Dakota, and Wisconsin from 2010 to 2012.

Defenseman Ben Hughes, Liberty University's ACHA Division I men's hockey team's first official commitment for the 2014-15 season, could be classified as a journeyman.

Hughes grew up playing hockey in Jacksonville, Fla., before moving to Minnesota as an eighth-grader to play for three seasons at Shattuck-St. Mary's School, a prep hockey power. He made it to two national championship games with that school that has now won a record nine Tier I 18-and-under national titles. Then, as a junior, Hughes played for Team Illinois, based in Chicago, losing to St. Mary's in the final.

"I won three silver medals, but was never able to win a national championship," Hughes said. "Hopefully, I'll be able to help Liberty win its first one. I have really high expectations for myself. I want to come in and do whatever I can to win the national championship. That should be the goal every year now."

He is currently finishing his associate's degree at St. Johns River State College in St. Augustine, Fla., while taking a two-year hiatus from the sport, and is eager to get back in the game and showcase his skills on the ice.

"I'm extremely excited, probably the most excited I've been in a long time," Hughes said.

"He's a fantastic addition to our team," Handy said.

Hughes got the chance to play in the LaHaye Ice Center and tour the campus during this past weekend's annual Hockey Recruitment Camp, held in conjunction with Liberty's College For A Weekend.

"It was pretty cool that I got to skate with some of the older guys that are graduating now — Andrew McCombe, Jackson Kuhn, Caleb Grow, those guys," said Hughes, who stayed with fellow defenseman and next year's captain Matt Sherry. "(Sherry)'s a great guy and a good leader so it was good to start building that relationship now."

"It's a good feeling as a recruit knowing it's going to be a really strong D corps," Hughes said. "I'm little biased being a defenseman, but it's going to be hard to find holes in our defense."

Hughes, who plans to study human resources and international relations, will stay in Lynchburg this summer to get a jumpstart on his training and skating, working out in Liberty's state-of-the-art facilities.

"I just want to come and be 100 percent in it," he said. "I've already fallen in love with the school and what it stands for. When I leave Liberty, I want to leave it a better place."