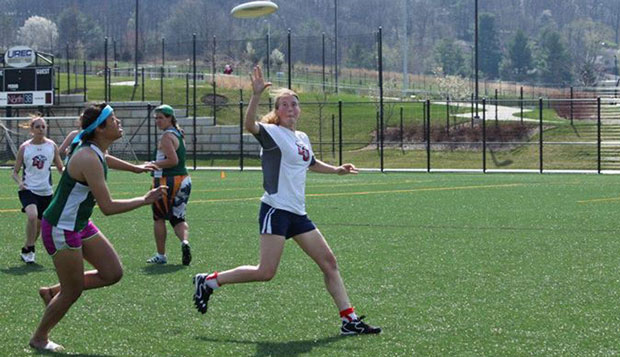 Liberty senior Krista Johnson, who scored the winning point in the fourth-place final against VCU, eyes the disc as she looks to make a catch in Sunday's match against George Mason.

For the first time since the program's inception in 2010, Liberty University's women's Ultimate Frisbee team has secured a bid to the May 3-4 Regional Championships in Martinsville, Va.

The Lady Flames qualified by going 4-4 and placing fourth out of seven teams in this past weekend's Virginia Division I Conference championship tournament, hosted by James Madison University.

Lady Flames Assistant Coach Jonathan Mast said the Lady Flames made the play of the tournament for the first point in the triumph over the Patriots, which he considered a must-win game for Liberty to have a shot at the playoffs.

"Kaitlyn Kane throws a bullet of a forehand to the back right corner and (fellow senior) Ashley Condon lays out like superman and catches it one-handed while keeping one foot in the back right corner," Mast said. "That was a great way to come out and make a statement. It got us fired up and made us want to play harder."

On Sunday, the Lady Flames defeated the College of William & Mary, the only team in the tournament they hadn't faced this season, 12-7, before losing to host JMU, the tournament runner-up, 13-1. That sent Liberty into the fourth-place semifinals, where they won a rematch with GMU, 11-4, before avenging the loss to VCU in the final, 11-10, eliminating both teams from regional consideration.

A consistent 15-mph wind was a factor in the fourth-place final.

"Our motto was to win with your legs, to make shorter passes and run more," Mast said. "My girls made pass after pass after pass. Once we finally got away from the zone trap they were running, it was off to the races."

Jillianne Hook scored a "Callahan goal" for Liberty, which is an interception in the opponent's end zone, in this case aided by the strong wind with the Lady Flames applying an aggressive zone trap.

The Rams came out in the second half with the wind at their backs and scored on two quick breaks to tie the contest at 9-9. The two teams traded points before Sydney Comer threw the winning pass to fellow senior Krista Johnson for the final point set up by four passes completed by teammates just outside the end zone.