Flames will face past four ACHA DI national champs in 2014 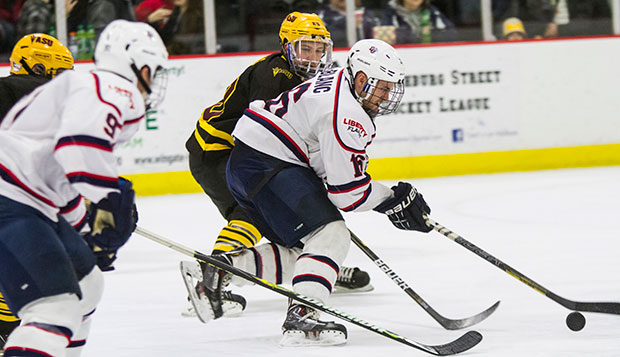 Liberty junior forward Lindsay LeBlanc pushes the puck up the ice during a loss to Arizona State University, the eventual ACHA Division I national champion, Jan. 25 at the LaHaye Ice Center.

Twelve games against the past four national champions highlight the 2014-15 schedule for Liberty University's ACHA Division I men's hockey team, released this week.

Following exhibition games against teams from Richmond and Potomac, the Flames will open their season with a two-game series against the Naval Academy, the team that eliminated them in the second round of this year's National Championships, Sept. 19-20 at LaHaye.

"We're really looking forward to that, obviously," Liberty Head Coach Kirk Handy said. "But each game on our schedule will give us a chance, night-in and night-out, to play against a top team … and will allow us to grow as a team throughout the year."

"Adding Minot is a huge addition for us," Handy said. "That's a team we haven't played but one time before, a few years ago, so we're excited to meet them again."

The other two recent national champions on the slate are Davenport University (2011), which Liberty will host Oct. 17-18 before meeting in Michigan on Nov. 20 to decide the Blue and Gray Cup, and Delaware (2012), Nov. 7-8 at LaHaye and Jan. 30-31 at Fred Rust Arena in Newark, Del., site of this year's DI men's and women's national tournaments.

"Teams like Oakland, Davenport, Delaware, and Stony Brook are teams we play year-in and year-out," Handy said. "We have a great deal of respect for them and we look forward to renewing our rivalries with them. Stony Brook (the national runner-up to ASU) had great success this year so playing them four times will be key matchups for us as well."