Men's volleyball upsets UCLA in first round of nationals 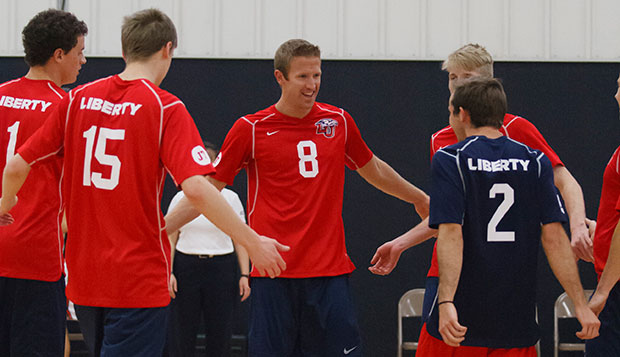 Liberty outside hitter Kevin Snyder (8) encourages his teammates after a kill in the EIVA Division I Tournament, hosted in the Schilling Center on March 22.

Liberty University's men's volleyball team has been around for more than 20 years, but never before has the club that competes in the Eastern Intercollegiate Volleyball Association reached such heights.

"This is the first time in Liberty history to play in (Division I-A) and to be ranked," said Flames graduate student and middle blocker Ryan Culkin, a former receiver on Liberty's football team who played beach volleyball last summer. "We're pumped. We just went crazy in the airport" when they heard the news on Wednesday.

In Thursday's first round of pool play, Liberty took another huge step forward by upsetting No. 17-seeded University of California, Los Angeles (UCLA) 25-17, 25-23.

"There's a great history in volleyball there (at UCLA) and I think we may have caught them by surprise, but we outplayed them and we were definitely the better team," said Liberty Head Coach Bryan Rigg, who on Wednesday was named the National Collegiate Volleyball Federation's Coach of the Year. "In the middle of the second game, we were down 19-13. We took a timeout and the guys got back in the game and ended up blocking about half of the final (12) points,"

Freshman middle hitter Josiah "Si" Hershberger and outside hitters Kyle Beaumont, a pickup from the Intramural Sports program, and sophomore Sam Eisbrenner combined for the majority of those blocks with Culkin getting the first touches on a handful of hits.

Outside hitter Kevin Snyder, another graduate student who was a high jumper at the University of Oklahoma as an undergrad, led the Flames in kills.

But the biggest story for Liberty may be the emergence of junior Ethan Chase at setter, after playing last season at right-side hitter.

"Ethan Chase stepped up huge for us (against UCLA)," Rigg said. "The better he gets, the better the team gets. It's a difference of night and day of how the team rises on his setting ability. He's a big guy (6 feet, 3 inches), he's left-handed and he sometimes he does a sneak attack using his left hand. But his setting ability is his greatest attribute."

Rigg said the EIVA, the nation's largest collegiate volleyball conference, is also one of the best. It is being represented by 34 teams — including 11 in the Division I-A bracket — at this week's tournament in Reno, which concludes with finals matches on Saturday.

"Usually, the West Coast has the upper hand, but looking around, all the teams in the EIVA are doing really, really well," he said.

The Flames were scheduled to face Purdue University at 2 p.m. and Santa Clara (Calif.) University at 4 p.m. in Thursday's final two rounds of pool play.