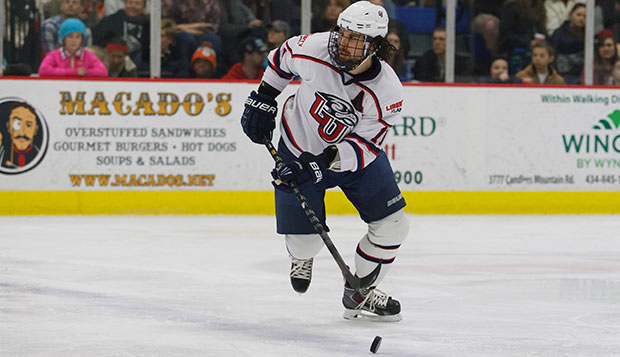 Liberty defenseman Matt Sherry returned for the last month of this past season and will enter his senior season at full strength.

Matt Sherry served as an assistant captain on Liberty University's ACHA Division I men's hockey team this past season, but spent four months of it rehabilitating from surgery after going down with a knee injury in the fifth game of the season.

"It was tough to sit out last season, watching instead of playing," said Sherry, who completed his undergraduate degree in psychology last spring and started his M.B.A. in athletics this past fall.

He hopes to stay healthy for the duration of next season, when he will have an opportunity to have a tremendous influence on the team as the Flames' head captain.

"It's a big honor and a big blessing for sure, to follow guys like (senior forward) Andrew (McCombe) and Joe Smith from the past," Sherry said. "I take it pretty seriously. It could have been any one of the guys in that (locker) room. Knowing the guys we have coming back and the new guys we have coming in, it's going to be an awesome experience to be in that leadership role."

Liberty Head Coach Kirk Handy said Sherry has developed into an excellent role model for the Flames, which is why he was the first player designated as captain.

"We have full confidence in him," Handy said. "He's a mentor, someone who will lead well for us. He's excellent in the classroom and represents himself and Liberty well both on and off the ice."

After being ranked as high as No. 3 in the country last season, Sherry is looking forward to leading Liberty back to the ACHA DI National Championships.

"We're in offseason conditioning, doing workouts and off-ice training, still trying to get better," Sherry said. "Our goal is to be No. 1. We want to up our game and win a national championship."

Handy said Sherry leads by example with his work ethic and embodies the coaches' character on the ice.

"The coaches do a good job of communicating with me and the new leaders to keep us all focused on the game plan and keep us headed in the right direction," Sherry said.

As one of six returning defenseman, along with junior Cam Bakker, sophomores Steven Bellew, Brandon Cox, and Kyle Miller, and freshman Chase Harris, Sherry will play a key role in fortifying the Flames' defense.

"Last year, we took some big strides in improving our D corps and it will be exciting to see how much better we'll be next year," he said.

The only defensemen who won't be coming back are assistant captain Jackson Kuhn and fellow graduating senior Caleb Grow.

"The thing about college hockey, there are always seniors graduating, and always sophomores and juniors stepping up," Sherry said. "We're losing Kuhn, (goalie Blair) Bennett, McCombe, and Grow, and it will be hard to replace those guys, but I'm excited to see younger guys step up."