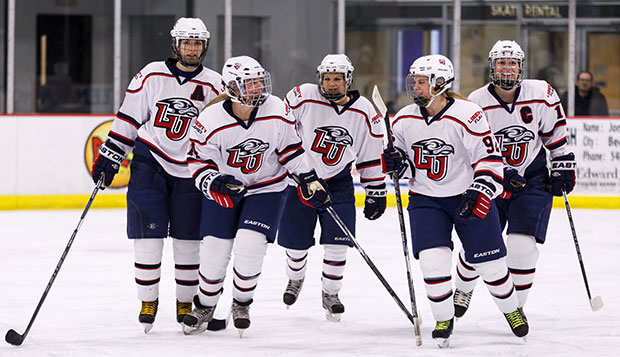 Liberty's entire line celebrates a goal during a Feb. 7 game at the LaHaye Ice Center. The seventh-seeded Lady Flames finished third at the ACHA DI National Championships in Newark, Del.

Despite being down a defender for the entire ACHA Division I women's hockey National Championships, Liberty University's defense allowed just eight goals in five games and emerged as consolation champions after Sunday morning's 2-1 double-overtime triumph over the University of Rhode Island.

"To be able to play the whole tournament with only four defensemen and the amount of ice time each of them logged was great," Lady Flames Assistant Coach Justin Forth said. "To play every other shift for five games in four days, every one of them did what they had to do."

Junior goalie Chantal Lischynski, who was named to the ACHA DI National Championships All-Tournament first team, made 26 saves and gave up only one goal for the second straight game after shutting out Adrian College in Friday's final round of pool play.

"Chantal stood on her head in (Saturday's) game and again today, she played outstanding," Forth said. "She made the crucial saves she needed to make and it was nice to see the team help her out today and get the win for her."

The seventh-seeded Lady Flames (17-11-5) wound up 2-2-1 in the eight-team National Championship field and finished third in both the tournament and the final ACHA DI rankings. Senior defenseman Courtney Fischer and sophomore forward Carrie Jickling were selected to the All-Tournament second team.

"The No. 7 seed typically isn't supposed to finish third in the tournament," Forth said. "It just shows the quality of hockey players we have on the team and the maturity level to be able to persevere through adversity."

Liberty's only two losses over the long weekend came to second-seeded University of Massachusetts, which won 2-1 in Thursday's first round of pool play, and top-seeded Miami (Ohio) University, which shut the Lady Flames out in Saturday's semifinals. Miami defeated UMass 3-1 in Sunday afternoon's championship game to capture its first ACHA DI national title.

"Third place to me feels better emotionally than second place did last year (after a 2-0 loss to Minnesota in the ACHA DI championship game)," Forth said. "In order to get third place, you have to win your last game. Obviously, the goal next year is to get first, but the girls did outstanding. We could not be more proud of them. They did awesome."

He and Head Coach Paul Bloomfield were pleased to see the Lady Flames finish with one of their best efforts of the season in the consolation game, especially after the heartache of losing in the semifinals the day before.

"The girls are totally exhausted," Forth said. "It just came down to determination and willingness to sacrifice the body and doing whatever you've got to do to win."

Liberty scored first on a power play goal with 9:47 left in the first period when sophomore forward Catharine Burrell tipped a shot taken from the point by sophomore defenseman Brittany Hymers past Rhode Island goalie Kayla DiLorenzo, who entered the tournament as the ACHA's leader in minutes (2,053) and shutouts (12) and ranked second with a 1.26 goals-against average and third with a 0.95 save percentage.

The Lady Flames maintained their 1-0 lead until the third period when Rams junior forward Kristy Kennedy scored with 13:26 remaining in regulation.

"It was near the end of the shift and we got bogged down in our end," Forth said. "We missed an assignment out front and they had a girl wide open and she scored through the five hole from in tight from the top of the crease."

Both teams traded shots off the post over the next two minutes and Liberty missed an open-net opportunity in the closing seconds of regulation.

"We had so many chances," Forth said. "We hit two crossbars and a post. We were buzzing around them the third period, throughout the whole game, really, and couldn't bury them."

After a scoreless five-minute extra period, Liberty finally broke through with the game-winner with 8:13 left in a second, 20-minute overtime period. Junior forward Sarah Stevenson and freshman forward Marissa Graham started a two-on-one break and Stevenson got a shot off before Graham charged the net and put away the rebound from the top of the crease.

"It was a feeling of relief," Forth said. "The girls played so hard throughout the tournament, it was.good to see them finish it off."

The Lady Flames outshot the Rams 37-27 and had the better quality opportunities.