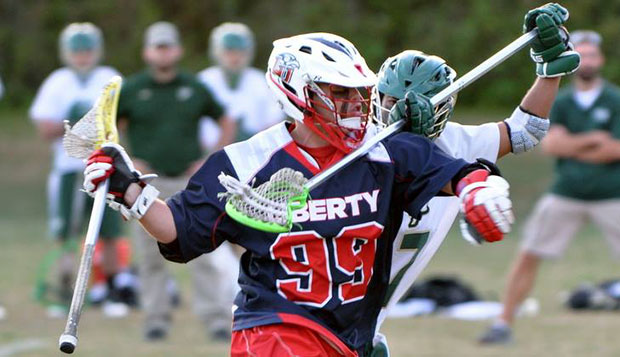 Junior forward Chris Armstrong scored the go-ahead goal off an assist from sophomore midfielder Bryce Mrakovich with 1 minute, 24 seconds remaining in regulation and added an insurance score 45 seconds later to lift Liberty University's men's lacrosse team to a 9-7 victory over the University of Florida, Friday night in Gainesville.

The fourth and final contest in the Flames' four-game spring break road trip through Florida featured a suspenseful ending against the 1-7 Gators, who recently returned from a California road trip in which they lost to three teams ranked in the MCLA DI Top-25 poll. In fact, Liberty (7-1), which received the most votes among non-ranked teams, was the first squad Florida had lost to that was not in the Top 25.

"Hopefully, we were able to earn a little respect in the SELC, traveling south and playing some teams outside of our region," Flames Head Coach Kyle McQuillan said.

The low-scoring contest was a byproduct of Liberty's conservative approach to running its offense.

"We were trying to slow things down and keep the pace at a pretty low level," McQuillan said. "We knew if we got into a shootout, that wasn't where we wanted to be. In the second half, we started getting a lot of calls against us, which gave them an opportunity to catch up, so we had to push the ball and become more aggressive."

Both of Armstrong's final two goals came off fast-break feeds from Mrakovich, who led Liberty with three assists.

"On the game-winning goal, Bryce streaked in and attacked the net, everybody slid to Bryce and he flicked it to Chris on the crease," McQuillan said. "He was able to catch it mid-air and throw it into the back of the net with a quick stick."

The Flames had a man advantage on the last score, and were working the clock with possession before junior goalie Ethan Kamholtz opted to push the transition game once more.

"It was a good opportunity and they capitalized on it," McQuillan said. "Ethan made a big save, looked upfield and found Bryce releasing from the top of the box. Bryce was able to draw the defenders to him and find Chris about 15 feet out."

Armstrong didn't give Florida's goalie a chance, catching the pass and unleashing a laser of a shot.

"There was nobody in his way, he had all the time in the world to set up, and he fired a rocket past him," McQuillan said. "They had defenders in position to cut off his angle to the net, so he decided to plant his feet and he was able to bury it."

On a night when Liberty sophomore Charles Fianko struggled in faceoffs, winning only six of 17 before Moore won two of the last three, Kamholtz delivered his second straight stellar game in goal, making 17 saves and allowing just seven scores.

"Ethan played great for us today, obviously, especially in the third when we had a string of four or five penalties in a row and he was getting rained on with shots," McQuillan said.

Senior attack Kurt Tobias gave the Flames a brief 7-6 lead with his fourth goal, moments after the Gators had rallied from a 4-1 deficit to tie it up on a man advantage. He had finished an assist from sophomore attack Ryan Miller from behind the net to extend Liberty's lead to 5-3 early in the second half. Moments later, after Florida closed the gap back to one goal, Miller converted off a steal and assist from freshman midfielder Chad Moore. Moore had given the Flames an early 3-1 lead by penetrating past two defenders and firing a bullet of his own.

Liberty will embark on another road trip next Saturday and Sunday against Davenport University and Michigan State, respectively, in East Lansing, Mich.