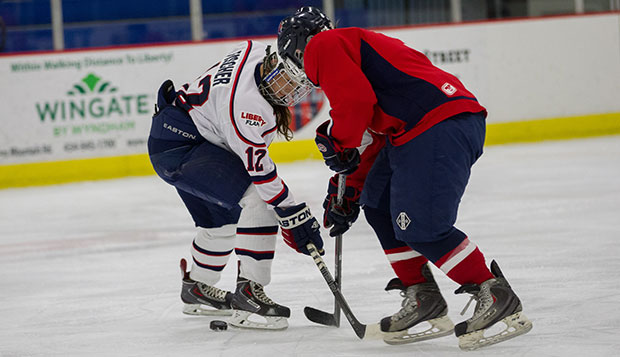 Liberty junior defenseman Madi Fischer (left) scored the Lady Flames' only goal with just over a minute remaining in the second period, Thursday morning against Massachusetts.

Liberty University's ACHA Division I women's hockey team waged a defensive battle with the University of Massachusetts in the first round of the ACHA DI National Championships, Thursday morning at Fred Rust Ice Arena in Newark, Del.

"It was a tough loss," Liberty Head Coach Paul Bloomfield said. "They're a lot bigger team, in numbers as well as size. The girls played well. If we had another line, that would have been helpful."

Liberty will face fourth-seeded Robert Morris University Illinois in the second of three rounds of pool play, Thursday at 6:15 p.m. in the Gold Ice Arena. That's where it will conclude round-robin action Friday at 1:15 p.m. against Adrian College, a 3-2 overtime winner over RM in a game completed just after Liberty's loss to UMass.

"The girls know what they need to do," Bloomfield said. "We can't have mistakes and we have to stay out of the penalty box. Tonight will tell how fast their bodies will recover."

The top two teams out of the four-team pool advance to Saturday's semifinals. All the tournament's games are being webcast live on pay-per-view.

Following a scoreless first period, and after killing a two-minute penalty to start the second, the Minutewomen broke the scoring ice against the Lady Flames with just under two minutes remaining in the that period. Junior defenseman Paige Harrington's shot from the point was shielded by a screen from a UMass teammate in front of Liberty junior goalie Chantal Lischynski.

Liberty tied it back up less than a minute later, with 1:02 left in the second, on a power play goal by junior defenseman Madi Fischer. She received a pass from behind the left side of the cage from junior forward Amanda Grainger as she crossed the blue line on the right wing and fired a shot that beat senior goalie Chelsea Corell.

"When Madi shot it, there were five or six people in front of the cage so (Corell) was screened and couldn't see it," Bloomfield said.

UMass netted the game-winner on a bang-bang play in front of the cage, finished by junior forward Chelsea Bram with 5:02 remaining in regulation.

"We just made a mistake and didn't cover something right in front of the net," Bloomfield said. "There was a turnover, we got out of position and they capitalized. When you play in this caliber of a tournament against this caliber of a team, when you make a mistake, they make you pay."

Bloomfield pulled Lischynski out of the cage with just over two minutes remaining and the Lady Flames mounted a final assault on the Minutewomen, but couldn't capitalize with the tying goal.

"It was a pretty good scramble at the end," Bloomfield said. "We got a couple faceoffs at their end because we were putting pressure on their goalie."

UMass outshot the Lady Flames 19-17 with Lischynski making 17 saves, one more than Corell, who boasts a 1.28 goals-against average with a 0.95 save percentage and five shutouts on the season. Corell made a couple of saves from close range to keep the game scoreless early in the second period.

"They had a really good goalie, and I thought our girls played with them," Bloomfield said. "As far as I'm concerned, UMass is the best team in the tournament."

Bloomfield plans to start sophomore Kristina Toppazzini in goal against Robert Morris on Thursday night. Liberty edged the Eagles 2-1 in double overtime in last year's semifinals as well as 3-2 in OT Oct. 19 at the LaHaye Ice Center.