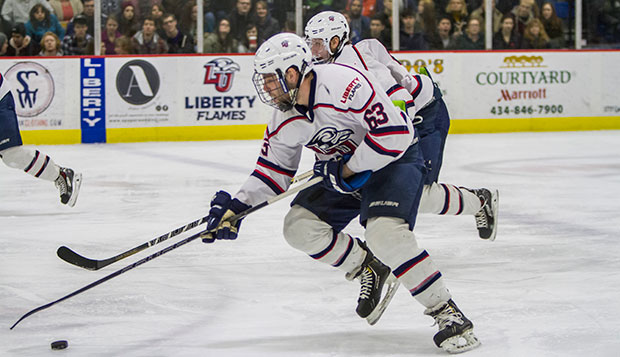 Liberty sophomore forward Bram Erickson (63) skates the puck on transition in a recent game at the LaHaye Ice Center.

Following their most successful regular season at the Division I level, Liberty University's ACHA DI men's hockey team was eliminated in the second round of the ACHA DI National Championships for the fourth time in five years, Friday at Delaware's Fred Rust Arena.

This year the Flames earned their highest tournament seed in DI history as well as an all-time high No. 3 spot in the ACHA computer rankings.

After falling behind 1-0 late in the first period, the Flames (29-6-3), seeded fourth for their seventh national tournament appearance in eight seasons, elevated their game for the second and third periods against the Naval Academy (29-6-2). The 13th-seeded Midshipmen then raised their play another notch for the sudden-death overtime period, pulling off a 4-3 upset on senior forward Thomas Krysil's second goal of the game and fourth of the tournament.

"Obviously, we're disappointed we didn't win the game," Liberty Head Coach Kirk Handy said. "In the first period, they outplayed us. Then in the second and third periods, we played well. When it goes to overtime, anything can happen. Our goal was to win the national championship and we didn't do it."

Liberty's only previous meeting against Navy took place Feb. 11, 2007, in the Flames' first season competing at the DI level. On that day, Liberty won an 11-7 slugfest in Annapolis, Md.

Krysil, who ranked sixth in ACHA DI in scoring this season with 35 goals and 28 assists, moved into the No. 3 spot with his fourth and fifth points in two playoff games. Seven minutes into the 20-minute extra period, Krysil stole the puck in the Flames' defensive zone, skated in around junior defenseman Cam Bakker and lifted a wrist shot over senior goalie Blair Bennett into the upper netting.

"We were pressing to try to score and to keep the play in their end," Handy said. "In (single-elimination) playoffs, anything can happen. It's not always the best team that wins, but hats off to them. They played well. We definitely had our chances, but we weren't able to finish."

Junior forward Daniel O'Hear scored first for the Midshipmen with 1:28 left in the first period, putting away the rebound in the left crease of a shot on transition by senior forward Cameron Harrigan.

Liberty netted the equalizer by capitalizing on a beautiful sequence of passes on a power play with 11:03 left in the second period. Freshman forward Robert Ward started a give-and-go to senior defenseman Jackson Kuhn through the left side before Ward sent a pass across the crease to junior forward Ryley Egan at the right of the cage. Egan pushed the puck across the goalmouth where junior forward Lindsay LeBlanc punched it in.

Then, just 13 seconds into the second period, LeBlanc won the puck along the back boards and made a diving effort to push it into the right crease, where senior forward and captain Andrew McCombe struck it home to give the Flames their only lead, 2-1.

That held up for more than 13 minutes before the Midshipmen, in a huge momentum shift, netted the tying goal at equal strength and the go-ahead goal on a power play in a span of 1:17.

Moments after Ward followed a shot by Kuhn and nearly stretched Liberty's lead to two goals with a point-blank putback from the left crease that was saved by Navy senior goalie Andrew Mills, the Midshipmen got their transition game going from the defensive end. Liberty sophomore forward Bram Erickson was called for a penalty as Navy junior forward Thomas Buckley cleared the puck along the left boards. He sent a pass up the center of the ice to sophomore forward Trent Lulow who fed it to junior defenseman Doug Swezey for the finish from close range.

Then, with the power play in effect, O'Hear threaded a pass across the goalmouth between Bennett and the Flames' defense to Krysil, who converted to give the Midshipmen a 3-2 edge with 5:10 left in regulation.

Liberty responded to tie it back up just over a minute later when Kuhn deflected a wrist shot launched by LeBlanc from the top of the left circle, knocking it in off the post to send the game to overtime.

"There were a lot of things we did well," Handy said. "Unfortunately, we came up on the losing side. I'm proud of our guys and the way they carried themselves this weekend. As a coaching staff, they made us proud as players and men. This year, we took a step forward with our program. We were able to consistently play well and be at the top of the league."

Navy, which advances to face the winner of Saturday morning's game between Davenport and Stony Brook, outshot the Flames 48-41 for the contest.

Liberty will open its 2014-15 season by hosting the Midshipmen, Sept 20-21 at the LaHaye Ice Center.