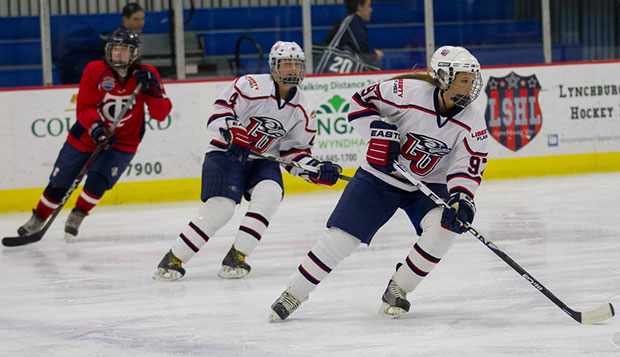 After opening an early 2-0 advantage on the host Washington Pride, Liberty University's ACHA Division I women's hockey team gave up four goals in the opening 10 minutes of the third period of a 4-2 setback, Saturday night at the Rockville Ice Center.

Catharine Burrell netted the Lady Flames' first goal off an assist from fellow sophomore forward Carrie Jickling four minutes after the opening faceoff. Later, with five minutes left in the first period, Jickling made it 2-0 with an unassisted score.

"We jumped out there pretty good," Liberty Head Coach Paul Bloomfield said. "We thought since we had a 2-0 lead, we could experiment with some lines. Sometimes, when you change things around, it messes with your minds. It was a combination of a lot of things. Between penalties and changing our lines around and the unfamiliarity with the offense, it took its toll."

Washington scored the tying and go-ahead goals on power plays before adding an insurance score two minutes later, midway through the third.

Washington, which will play at Liberty on March 22 and 23 after the ACHA DI National Championships in Newark, Del., outshot Liberty, 22-14.

"They're a U-19 team and they travel all over," Bloomfield said. "They're not very big, but they're a decent team. They had a full bench and we had a lot of people out."

Liberty was playing without junior forwards Sarah Stevenson and Jenny McArthur as well as junior defenseman Autumn Kucharzcyk, who is recovering from a knee injury.

In addition, it pulled senior Leanne Niemi up from the Division II team to help provide depth behind sophomore Kristina Toppazzini, who is nursing a knee injury, and junior Chantal Lischynski. Niemi made 18 saves in her first DI action of the season.

"She did a good job," Bloomfield said. "We didn't lose because of her."

Liberty (15-9-4) has less than two weeks to prepare for the national tournament, when, as the No. 7 seed, it will face the University of Masssachusetts and Robert Morris Illinois on the first day.

"We play two very strong teams right off the bat at nationals," Bloomfield said. "I'm glad we're not coming back tonight with any more injuries.