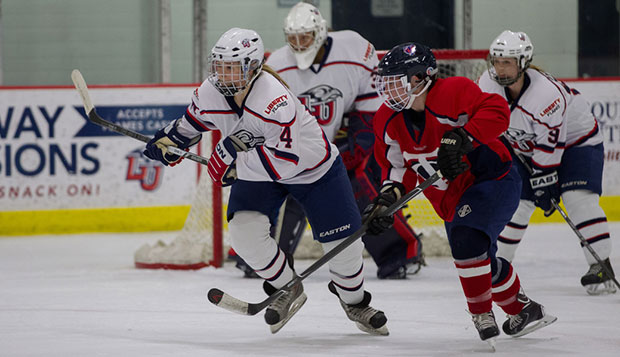 Liberty University's ACHA Division I women's hockey team used Sunday's contest against the Tri-City (N.C.) Selects as preparation for the ACHA DI National Championships, stretching its winning streak to six games with a 4-0 victory at the LaHaye Ice Center.

Ranked No. 7 in the third ACHA DI National Poll, the Lady Flames will find out where they are seeded for the March 12-15 Nationals in Newark, Del., when the fourth and final rankings are released Wednesday.

"It keeps them on the ice, keeps them motivated to play," Lady Flames Head Coach Paul Bloomfield said, noting the team will travel to play against the Washington Pride, a U-19 select team, on Saturday.

Tri-City Selects (17-9-4) scored a 4-3 victory over Liberty (15-8-4) on a breakaway goal in the final 20 seconds on Sept. 21 before the two teams played to a 5-5 tie the next day. However, Liberty has improved tremendously over the past five months and the Selects didn't bring a complete squad this time, dressing only 10 players for the rematch.

"Half of them are missing for whatever reason," Bloomfield said. "The result was what we needed and I think the girls are encouraged that we won, but it was disjointed hockey and I felt like we were struggling. The problem is sometimes you play down to these weaker teams. We were just not mentally up like we needed to be to play a strong team."

Sophomore forward Catharine Burrell gave Liberty an early lead with an unassisted goal midway through the first period before junior forward Jenny McArthur put the Lady Flames up 2-0 with a shorthanded, unassisted, breakaway goal five and a half minutes into the second.

Sophomore forward Carrie Jickling scored on a beautiful shot into the upper corner midway through the second off an assist from junior forward Sarah Stevenson before sophomore defenseman Brittany Hymers completed the scoring four minutes later off assists from Jickling and Stevenson.

Moments after that goal, Liberty sophomore goalie Kristina Toppazzini went down with an injury as she made a save in a crowd around the cage.

"The puck just went in, there was a little bit of traffic, and she just reached for it and twisted her knee going down," Bloomfield said. "I hope it's OK, we really need her. She's been playing really well."

Junior goalie Chantal Lischynski, who is nursing a hand injury, took her place and completed the shutout as the Lady Flames outshot the Selects, 31-9.

"We may have to rely on Chantal," Bloomfield said of Lischynski, who led Liberty to the ACHA DI Final Four in 2012 before going down with a knee injury of her own. "Other than that, we've got everybody healthy except (junior defenseman) Autumn (Kucharczyk), who just had knee surgery so I don't know if she'll be back."