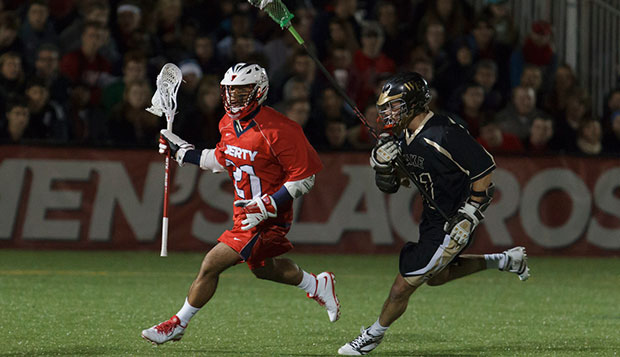 Liberty senior middie Derek Haywood (21) works the ball up the field on transition, Friday night against Wake Forest at the Liberty Lacrosse Field.

Nearly 1,200 spectators flocked to the Liberty Lacrosse Fields for Friday's season-opening contest against new MCLA Division I rival Wake Forest, which started at 10 p.m. and didn't finish until after midnight.

The Flames (1-0) gave their fans plenty of offensive fireworks to keep their attention — led by sophomore attack Ryan Miller's six goals and senior attack Kurt Tobias' four goals and two assists — in a dominating 21-1 defeat of the Demon Deacons (0-4).

"It was a lot of fun," said sophomore midfielder Bryce Mrakovich, who added a goal and three assists. "We weren't sure exactly what to expect coming into a new division, but we're excited to see what the season has to come."

Head Coach Kyle McQuillan was pleased with the Flames' offensive execution, even after opening a commanding lead.

"It's always tough to remain disciplined when you get in a game like that, to keep the guys on the same page and do the things that we're practicing and stay within the system," McQuillan said. "For the most part, I think they did a good job of that."

After a big hit jarred the ball loose from a Wake Forest player near midfield, senior midfielder Derek Haywood ran it downfield and around the back of the goal before spotting Tobias in front for a high-percentage shot and an early 2-0 lead.

"Derek played really well," McQuillan said. "This is the first week we've had him back from shoulder surgery. We know what we're going to get from Derek, a high performance from him game-in and game-out."

Moore narrowly missed on a rocket of a shot before Tobias scored on the run off another feed from behind the cage. Sophomore faceoff specialist Charles Fianko won the ensuing draw at midfield and Tobias found Miller for a fast-break finish, stretching the lead to 4-0. Miller rifled in a shot from the top left of the perimeter before Haywood assisted Armstrong down low for a backhanded finish from the right endline to make it 6-0 at the end of the first period.

"We tried to definitely work it around, get people in, and get people moving," Mrakovich said. "We've got some kinks we've got to work out, but definitely, we're moving in the right direction."

Bernardo opened the second-quarter scoring off an assist from Moore before Miller scored from the top of the perimeter and added another goal on a man advantage after Wake Forest freshman Alex Faber was called for crosschecking at midfield.

He finished a feed from Mrakovich in the right crease with a deft backhanded shot.

Senior middie Miguel Lozada then netted the first of his two scores, penetrating into the perimeter and drawing a defender to him before bouncing a fadeaway shot past Demon Deacons goalie Kevin Fischer for a 10-0 advantage.

A minute later, two minutes before halftime, Tobias extended the lead to 11-0 with a shot from the right wing assisted by Moore before Miller opened the third quarter with another score set up by Mrakovich.

An untimely substitution led to Wake Forest's only goal in the third period, spoiling a potential shutout for junior goalie Ethan Kamholtz, who made seven saves.

"We wanted that elusive goose egg," McQuillan said. "I've never had one. With lacrosse, it's tough. It's like pitching the perfect game in baseball. It doesn't happen very often. We got close, but we made a mistake. We didn't move the ball on transition. We dropped the pass and made a substitution when we shouldn't have.  We gave them basically a fast-break opportunity and they took advantage of it. It was a good learning opportunity for us."

The Flames anticipate a tougher challenge in their second game against New Hampshire, set for Sunday at 11 a.m. at the Liberty Lacrosse Fields.

"New Hampshire flew in (Friday) morning with 45 guys, so I know they have a big roster," McQuillan said. "I know they play great lacrosse up north and they've had a program for a long time that's had a lot of success. I'm expecting to be tested and I'm excited to see how we stack up against a team from the far north."