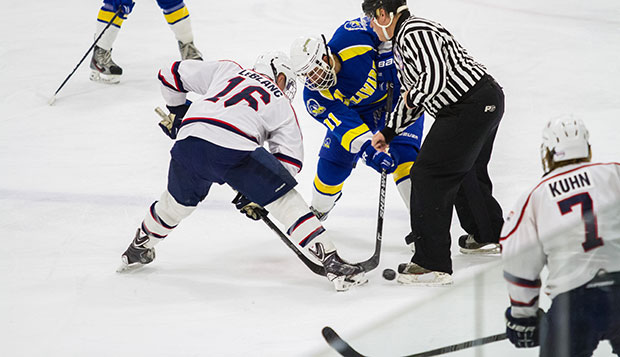 Liberty junior forward Lindsay LeBlanc takes a faceoff in front of senior defenseman Jackson Kuhn in a 6-1 win over the Blue Hens on Nov. 8 at the LaHaye Ice Center.

The third-ranked Flames (24-6-2) scored three unanswered goals in the second period and added an empty netter late in the third to snap their three-game losing skid and take three of four games from the No. 9 Blue Hens (21-7-3), who had won Friday night's opener in a shootout.

Delaware senior forward Mark Zeszut (the fourth-leading scorer in ACHA DI) and sophomore forward Joe Bastone each scored on putbacks of shots saved by Liberty senior goalie Blair Bennett, who made more than a handful of clutch stops.

Liberty outshot the Blue Hens 13-7 in the first period but had nothing to show for it on the scoreboard.

In the second period, the Flames found their finishing touch as Robert Ward, Liberty's second-leading scorer, took a pass from fellow freshman forward Brandon Mistal and beat Delaware freshman goalie Dylan Troiano to the top shelf, trimming the deficit to 2-1.

"Our message to the guys after the first period was we're doing all the things right, the puck's just not dropping for us," Handy said. "I was proud of the ability of the team to come back and we had one of our best periods of the year in the second period. We just came at them in waves and were very, very dominant."

"We were all over them," Handy said. "If it wasn't for their goalie, it could have been a lot worse. I was proud of way they battled and were able to come away with the victory."

Junior forward Ryley Egan, who hit a post with a shot in the first period, tied it up with a wrist shot off an assist from senior defenseman Jackson Kuhn with 2:35 left in the second. Just two minutes later, junior forward Lindsay LeBlanc, Liberty's scoring leader, capitalized on a power play to score the go-ahead goal set up by Egan and senior forward and captain Andrew McCombe.

"Egan made a beautiful pass out in front, which was more of a shot, and LeBlanc put it in," Handy said. "That line had a big game with three of our four goals."

McCombe hit the right post with a shot from the left circle midway through the third period as the Flames maintained the pressure on Delaware's cage and finally got the clincher on Egan's empty-netter from mid-ice along the left boards, set up by LeBlanc.

A week after being called for 11 penalties and giving up three power-play goals in a 6-2 loss to top-ranked Arizona State, Liberty allowed Delaware only one man-advantage opportunity.

"One of the biggest things that improved today was our team discipline," Handy said. "We only took one minor penalty, which was huge for us."

Defensively, the Flames were strengthened by the return of senior captain Matt Sherry, who was sidelined by a knee injury in late September.

"Matt Sherry came back and played two solid games for us," Handy said, noting his conditioning level was put to the test by Rust Arena's Olympic-size ice. "It was good to get him back in the lineup. He's one of the keys for us being able to improve, another piece to the puzzle. (Junior defenseman) Cam Bakker had a big game for us and played really well on the back end. We definitely took a major step forward today and we're looking forward to building on this for the rest of the season."

Liberty returns to the LaHaye Ice Center next Friday and Saturday for 7 p.m. contests against Oakland University. The Grizzles defeated the Flames in the 2006 ACHA DII national title game before winning the ACHA DI crown when both teams moved up in 2007.