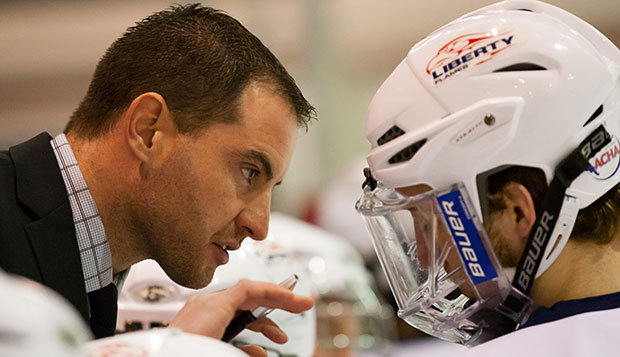 Liberty DI men's hockey Head Coach Kirk Handy confers with a player on the bench last season. The Flames have climbed to their highest ACHA DI ranking in his 14 seasons at the helm.

"No. 4 was the highest we had ever been ranked," Liberty Head Coach Kirk Handy said. "Even though we didn't play since before the (12th) ranking, when we beat Ohio two games on the road early in the season, and then Ohio split with the No. 2 team, Robert Morris Illinois (Dec. 13-14), that moved us up."

Liberty will travel to No. 9 Stony Brook (N.Y.), a team it split a two-game series with Nov. 15-16 at the LaHaye Ice Arena, to start the second half of its season Jan. 10-11 before visiting the top-ranked Sun Devils, Jan. 16 in Tempe, Ariz.

"Obviously, we're looking forward to the opportunity," Handy said. "At the beginning of the season, we divided our season into six parts. We have just completed part three and this (ranking) definitely puts us in good shape heading into the next stage.

"I feel we have a strong schedule and that was done intentionally to prepare us for the sixth part of the season," he added, referring to the ACHA DI national tournament, where the Flames expect to make the field for the seventh time since moving up from DII in 2006.

"What we're looking forward to is just the opportunity to battle with our guys," Handy said. "We believe in and have full confidence in our players. All season, we've worried about our team and not about the other team … about our preparation and how ready our guys are to play."