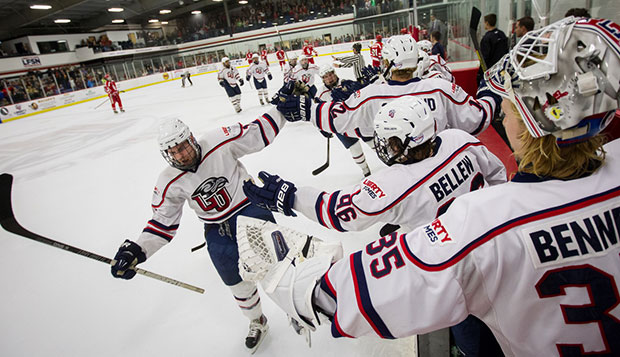 Liberty senior goalie Blair Bennett (35), who was pulled for the final 43 seconds of regulation, greets junior forward Lindsay LeBlanc (left) after he scored the tying goal against Stony Brook from the same spot as he had last Saturday against Delaware.

For the second straight game, Liberty University ACHA Division I men's hockey junior forward Lindsay LeBlanc netted the equalizing goal in the final minute of regulation, allowing the Flames to continue their winning ways with a shootout victory, this time in the ACHA DI Game of the Week over No. 11 Stony Brook, Friday night at the LaHaye Ice Center.

The No. 4 Flames (17-1) stretched their streak of success to 10 games with a 4-3 victory clinched by two spectacular stops by senior goalie Blair Bennett and goals by LeBlanc and freshman forward Charles Williams in the shootout.

However, Liberty wouldn't have gotten to the shootout without the late-game heroics of LeBlanc, who capitalized on a six-on-four opportunity after Stony Brook was called for a late penalty and Liberty's coaches pulled Bennett for the final 43 seconds. Like last Saturday in a 5-4 win over Delaware, LeBlanc again posted up to the left of the goal, this time finishing a feed from freshman forward Robert Ward by pocketing the rebound of his initial shot blocked by Seawolves goalie Brendan Jones from a difficult angle.

"I couldn't believe it went in," Flames senior forward and team captain Andrew McCombe said. "It was awesome. Big players show up at big times. He's probably one of the most intense guys I've ever played hockey with and he just lives for it, he loves it."

"Lindsay's a big part of our team and an emotional leader for us, a guy who shows up every night," Liberty Head Coach Kirk Handy added. "The will to win in the last minute was great and we need to have that for 60 minutes. We need to have a greater sense of urgency."

Liberty rallied from behind to force overtime after blowing a 2-0 advantage after the first period.

McCombe assisted the Flames' first two goals, the first on a power play just three minutes and 17 seconds into the contest when junior forward Ryley Egan threaded a shot from the top of the right circle between Jones and the right post. Exactly three minutes later, Ward got a second chance after his fast-break shot from in the right crease clanged off the upper-right corner of the cage. He capitalized on the next opportunity after receiving a return feed from McCombe.

But as quickly as the Flames opened the two-goal advantage, they let the Seawolves tie it back up even faster with two scores in a span of 17 seconds five minutes into the second period.

Seconds after Stony Brook killed an early Liberty power play, defenseman Alex Miller skated all the way up ice on a solo breakaway and sneaked a backhanded wrist shot past Bennett through the five-hole at the 15:03 mark. Moments later, forward Dan Cassano knotted it up from deep in the right crease off a back-door assist from Vincent Lopes and Kevin Kavanagh.

"Our penalty kill was strong tonight," Handy said. "That's a big part of our team."

The Seawolves converted the go-ahead goal with 5:46 left in regulation, with Wes Hawkins chipping in a third chance in the right crease after the Flames failed to clear the puck out of the defensive zone.

"Stony Brook played well tonight," Handy said. "They actually outplayed us tonight for parts of the game. We're going to have to play a lot better (Saturday night). We weren't executing the way we want to be executing. It doesn't mean the effort wasn't strong. The effort was OK, but we need to be excellent and that's what we're going to be shooting for (Saturday night)."

The Seawolves outshot the Flames 37-30 on the night, with Bennett making 34 saves in regulation and the five minute overtime and another two in the shootout.

"We just didn't work as hard as we should have tonight," McCombe added. "The guys were not as focused. Good teams find a way to win and I'm glad we did, but we'll be better (Saturday night)."

Liberty concludes its 12-game homestand Saturday night at 7 against the Seawolves (11-3-1) before heading to Michigan for three games next Thursday through Saturday.

McCombe hopes for another lively crowd to send the Flames out.

"The fans have been absolutely incredible and we love playing in front of them," he said. "It was a good one, definitely. It would have been nice for us to play a little better, but a win's a win and we'll get back to it (Saturday)."