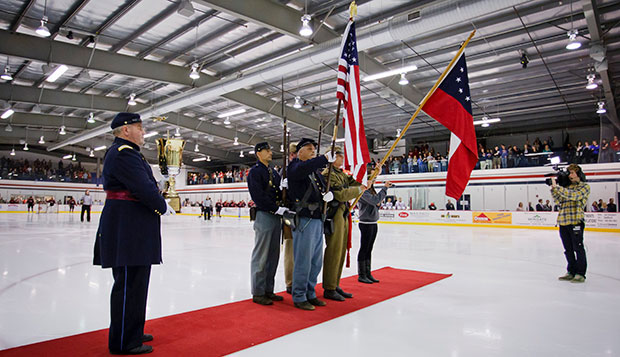 Bruce B. Butgereit (left), commander of the Michigan Commandery of the Military Order of the Loyal Legion of the United States, introduces the Blue and Gray Cup during a presentation of colors at the LaHaye Ice Center last year.

Though there is not nearly as much at stake Friday and Saturday nights at the LaHaye Ice Center, Liberty University's ACHA Division I men's hockey team will host Davenport University in the first of three skirmishes that will determine which school wins rights to the Blue and Gray Cup, inaugurated last year.

Each game will be critical in determining which team is ranked higher in the ACHA DI poll as they struggle to return to the national tournament. Liberty was No. 10 and Davenport No. 12 in last Friday's third regular-season ranking.

This season's series, which concludes Nov. 21 in Grand Rapids, Mich., extends a rivalry dating back to the 2005 ACHA Division II national tournament. Liberty eliminated Davenport in the opening round that year in a tournament hosted by Oakland, in Rochester Hills, Mich. The following season, playing each other for the fifth time in a month, the Flames edged the Panthers again, this time in overtime in the 2006 DII national semifinals, before falling to Oakland in the final.

Liberty and Oakland moved up to ACHA Division I the next year, when Oakland won its first DI national title and Davenport advanced to the ACHA DII championship game, losing to rival Michigan State. The Panthers went on to claim the next three ACHA DII national championships before making their move to ACHA DI in 2010 and immediately capturing the DI national crown by defeating two-time defending champion Lindenwood.

The past two seasons, the Flames and Panthers have squared off a total of seven times with the visiting team winning all seven contests. Last year, Liberty lost 6-3 Oct. 19 and 6-5 in a shootout Oct. 20 at LaHaye, before defeating Davenport 5-3 Nov. 29 in Grand Rapids, Mich., where the Panthers were awarded the first Blue and Gray Cup.

"Every time we play each other, it's a really good game," Davenport third-year coach Phil Sweeney said. "It's a natural rivalry. It's funny, because we're 15 hours apart, but there's something about the games that are just special."

In conjunction with Homecoming Weekend, Liberty will recognize at least 25 former players from as early as the 1980s, as well as their families, in an on-ice ceremony during the intermission between the first and second periods of Friday night's game.

Liberty scouting report: The Flames have outscored opponents by a 53-23 margin on the season. Liberty's high-octane attack is paced by senior forward and team captain Andrew McCombe (seven goals, seven assists) and freshman forward Robert Ward (6G, 8A) who ranks tied for 11th in the ACHA with 14 points each. Senior defenseman and team captain Jackson Kuhn (6G, 7A) and junior forward Lindsay LeBlanc (5G, 8A) follow close behind, with both players tied for 20th with 13 points.

Liberty's prolific scoring production through nine games has for the most part taken the pressure off of freshman goalie Matt Pinel (6-1, 3.03 goals-against average, 0.89 save percentage) and senior Blair Bennett (2-0, 1.25 GAA, 0.94 SP), who has allowed just two goals in three appearances. Both keepers have recorded one shutout.

Davenport scouting report: After opening the year with a 6-1 rout of Great Lakes Collegiate Hockey League rival Western Michigan and losing a 4-3 shootout to 2012 ACHA DI national champion Delaware at Patterson Ice Rink, Davenport rebounded with a 1-0 win over Colorado State and a 5-1 triumph over Towson in last weekend's ACHA Showcase in Ohio. (Liberty shut out the Tigers by a 10-0 count on Sept. 27.)

Phil Graveline (2-0) and Matthew Kaludis (1-0-0-1) each have made two starts in goal and boast save percentages — 0.96 for Grapeline and 0.95 for Kaludis — that rank seventh and eighth, respectively, nationally for goalies with two or more decisions.

All-time Series: The Panthers and Flames are deadlocked in a series that dates back to 2005, with the records between the two teams standing at 15-15-1. The Flames dominated the series early, winning eight of the first 11 meetings, with another ending in a tie. However, the Panthers have prevailed in six of the past nine contests between the two teams to draw even with the Flames.

Coaches: Kirk Handy, in his 14th season as Flames head coach, has an overall record of 287-123-13. Phil Sweeney is in his third season as head coach with the Panthers after serving as an assistant for seven seasons. His overall record is 51-30-2, including a 30-10-1 mark last season that boosted Davenport's ACHA DI ranking as high as No. 7.