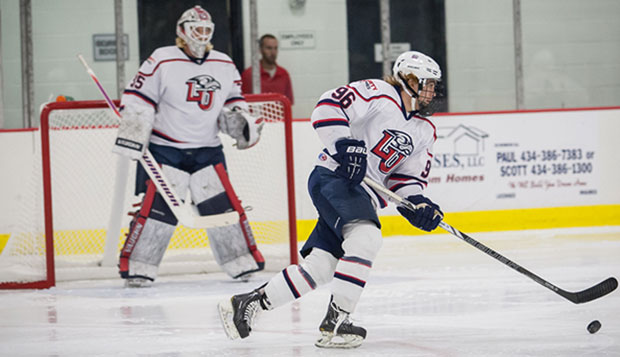 Liberty sophomore Steven Bellew clears the puck out of the defensive zone in front of senior goalie Blair Bennett, who made 24 saves in Saturday night's rematch with Arizona at the LaHaye Ice Center.

Moments after surviving a five-on-three power play on a series of saves by senior goalie Blair Bennett, Liberty University's ACHA Division I men's hockey team responded with a flurry of shots on Arizona's cage.

The Flames hit two pipes and one crossbar in a three-minute span before finally capitalizing on a power play opportunity of their own when junior forward Ryley Egan put away a beautiful crossing pass from Robert Ward into the open right side of the net.

That stretched Liberty's lead from one goal to two, turning the tide in the Flames' favor in a game that featured furious action from start to finish, Saturday night at the LaHaye Ice Center.

Freshman forward Charles Williams added a goal on a two-on-one fast break 10 minutes later to ice the 5-2 victory for Liberty, ranked No. 10 in the latest ACHA DI poll. On Friday night, the Flames (8-2) had suffered their first setback at the hands of the No. 19 Wildcats by a 5-1 count.

"It's a huge rebound game," Liberty head coach Kirk Handy said. "It's something that we have to have if we're going to play with the top teams in the country. Blair played well and kept us in the game. Blair's a great goalie. He's been strong for us for three years and it was nice to see him play so well tonight."

Arizona forward Andrew Murmes scored both of his team's goals on power plays, the last on a five-on-three that drew the Wildcats (3-3) back within 3-2 just a minute into the third period.

The Flames outshot the Wildcats (3-3) 30-26 for the contest, with Bennett making 24 saves, many of them critical on power-play opportunities. Early in the third period, senior defensive captain Jackson Kuhn and junior defenseman Cam Bakker helped finish off the Wildcats' final five-on-three, preserving the 3-2 lead.

"We played a pretty smart game other than we took too many penalties," Handy said. "Thank goodness our penalty kill was phenomenal tonight. Guys like (Christian) Garland and (Ryan) Kerr and (Tyson) Street and (Brandon) Mistal, and Blair (Bennett) played really well tonight when we needed them most. Those guys want to be in that role and they do an excellent job."

After senior forward and team captain Andrew McCombe tied the game at 1-1 with 2:29 left in the first period off assists from Lindsay LeBlanc and Caleb Grow, Bram Erickson put the Flames on top for good less than five minutes into the second with a goal set up by Grow and Williams.

Less than seven minutes later, Kuhn sparked the attack from the defensive end and cleaned up the rebound of a shot by LeBlanc deep in the right crease to extend Liberty's lead to 3-1.

"Last night, we didn't bear down around the goal to put away our chances," LeBlanc said. "Tonight, we came out and capitalized on our opportunities."

"On the third goal, Jackson Kuhn wills the puck out of the zone, comes in, follows up the play and scores," Handy added, noting fellow senior captain McCombe helped ignite the offense. "Talking about senior leaders on our team, there comes a time in the game where they had to step up and those guys took control of the team."

Liberty returns to action next Friday and Saturday nights when it hosts Davenport, the 2011 ACHA DI national champions, in the teams' first of four matchups to determine the annual Blue and Gray Cup.