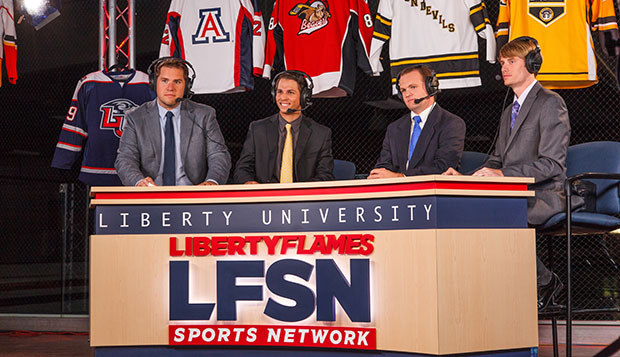 Flames Hockey sports broadcaster Rett McGibbon and moderator Devan Mellow were joined by Ohio University broadcasters Kevin Noonan and Ryan Boyd for the hour-long show, which featured interviews by Liberty Club Sports assistant director Dave Semenyna with coaches from a few of the top teams in the ACHA, including defending national champion Minot State, Illinois, and Davenport. Other teams featured were Arizona, Oakland, and Lindenwood, which captured ACHA DI national titles in 2009 and 2010 and finished runner-up in 2011 and 2013.

The panelists offered their opinions on which are the best conferences, teams, and individual players in the league this year in advance of Friday's release of the first DI national ranking. They also touched on which rinks are the toughest to play in, agreeing that few are more daunting than Minot State's Maysa Arena in Minot, N.D., where the Beavers were undefeated last year. In a discussion of the nation's top rivalries, the broadcasters from Liberty and Ohio mentioned their respective schools' teams, which split two games last year at LaHaye before the Bobcats ended the Flames' season in the second round of the ACHA DI national tournament near Chicago. After visiting West Virginia this weekend, Liberty's second road trip will be to Bird Ice Arena in Athens, Ohio, on Oct. 4 and 5, site of last year's ACHA All-Star game.

In other news announced on the show, this year's national tournament will be hosted by Delaware, the 2012 national champions. The last time it was held there, in 2011, Davenport won the title. The Olympic-sized rink in Newark, Del., could favor teams such as Liberty that have an abundance of speed.

It was also revealed that a new computerized ranking system will be utilized by the ACHA this year, similar to the BCS system for college football, replacing a coaches' poll. It will rank teams based on their strength of schedule and that of their opponents, in relation to their win-loss record, eliminating subjectivity from the poll that determines the 20 teams that will compete in the national championship tournament. Last year, Liberty also broadcast that ACHA DI national tournament selection show, as well as the final top-20 poll, live from LaHaye.