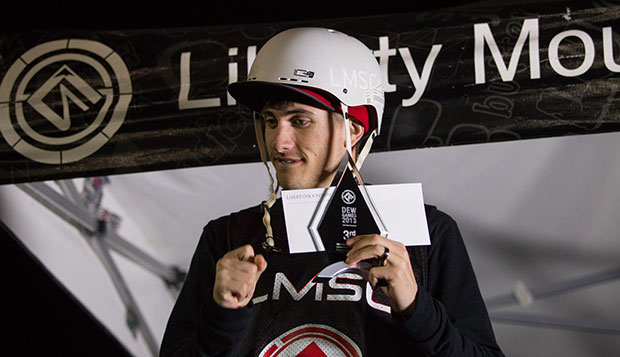 Ryan Leeds served as an assistant coach for the Flames last year and placed third at the April 27 Dew Games at Liberty Mountain Snowflex Centre.

"I love snowboarding and I love skiing, too, I love the culture," said Leeds, who is in his second year of graduate school, pursuing of a Master of Divinity degree. "Being part of Liberty's snowboarding team during my undergraduate career, I just had a passion for it and I want to see it succeed. It's a lot to take on, but I'm excited about the challenge and excited to see where the next few years are going to go."

Following tryouts, intense training in practice will determine who has what it takes to excel, well before the Flames host their first Collegiate Freestyle Association event in February.

"We will have three days a week of practices and that's where they'll have to really start to showcase that they can complete the tricks necessary to compete at the national level," Leeds said.

"Definitely, we're hoping to start getting younger people who are hungry for it so we can start investing in them and developing them so by the time they're juniors and seniors, they've been around for a while and understand how everything goes and works," he said.

In his second year on the team in 2011, Leeds competed at the USCSA National Championships in Copper, Colo.

"It was great," he said. "The level of riding out west is definitely a lot higher than it is on the East Coast, but it's just great that we have a facility where we can go all year round because it's going to help us get to where they are a lot faster."

"It's really good for people that may not be as comfortable going off a bigger jump," Leeds said. "It is one of those stepping stones to help them feel more comfortable being in the air and doing flips and spinning and things like that."

He knows it won't be easy, but aspires to see the Flames improve on their fourth-place finish at last year's USCSA nationals at Sun Valley, Idaho, when Will Scheren, who started a new job in Baltimore last week, was head coach.

"Will did a really good job last year and it's going to be hard to try to fill those shoes, but I'm hoping that I'm able to do better than that, to take them to a national championship," said Leeds, who will be assisted by Brent Washburn and Kevin Mangiuob. Washburn replaces Scheren as Snowflex's operational manager.

This summer, Leeds was in town for the two overnight camps Snowflex hosted in July, when he gained valuable experience in coaching snowboarders of a wide range of ability as well as leading morning devotions and evening Bible studies with the campers.

"It's harder because you're on a time crunch, but with the week that we had, with kids snowboarding in the summer, they're kind of driven to go for it and when you have that kind of attitude about snowboarding, you progress with it really quickly," Leeds said. "That's especially true with Snowflex, because Snowflex is a little bit more forgiving than actual snow so it promotes an atmosphere of progression."

Soon after those camps concluded, Leeds flew to Australia and later to New Zealand to spend two weeks traveling with with Snowboarders and Skiers for Christ (SFC). At nights, in ski lodges, he helped premier the film ‘Anthropology,' produced by The Nations Foundation, which documents a year in the life of professional snowboarder Nick Visconti from Lake Tahoe, Calif. Visconti was involved in the sport's party culture but throughout the film shares his testimony of how he was saved.

"It was interesting because they were not 100 percent receptive to the Gospel down there but they were interested in it because it had to do with snowboarding," said Leeds, who did on-the-hill ministry with Skiers and Snowboarders for Christ chapters in both Australia and New Zealand, where winter is just now ending.

"We were there mainly just to encourage them and bounce ideas off of them," he said.

"In New Zealand, we actually put on a conference for Snowboarders for Christ, so it was basically just to give them tools to equip them to do ministry better."

At Liberty, Leeds helped start a chapter of SFC in 2011 after meeting with representatives from that organization when Snowflex opened in 2009.

"It's been pretty active," Leeds said. "We meet weekly and do Bible studies and then once in a while we'll do an outreach event with inner-city kids. We bring them up, teach them how to ski and snowboard for free, and witness to them."