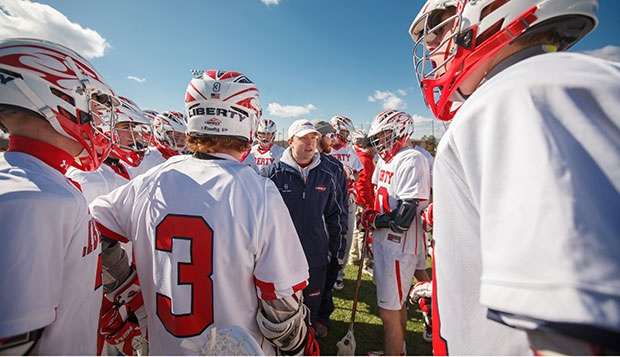 Flames head coach Kyle McQuillan (center) addresses his team in a huddle during the Feb. 17 season-opener played in frigid temperatures at the Liberty Lacrosse Complex. Liberty is moving up to Division I of the Men's Collegiate Lacrosse Association after reaching the MCLA Division II national semifinals this year.

Over the past three seasons, the Liberty University men's lacrosse team has risen from the ashes, finally defeating the defending champion Elon Phoenix for their first Southeast Lacrosse Conference North West Region regular-season title before winning the SELC Division II tournament and advancing to the Men's Collegiate Lacrosse Association Division II nationals for the first time.

The Flames made it all the way to the MCLA semifinals before falling to St. Thomas (Minn.), 10-9 in overtime. The Tommies went on to win their fifth MCLA DII national title in the past six seasons.

Building a program from the ground up is a process that has required plenty of patience, perseverance, and foresight. Fourth-year coach Kyle McQuillan knows that better than most, though he has succeeded in a remarkably short period of time.

McQuillan played for the Flames from 2004 to 2006, serving as team captain his sophomore and junior years. But he missed his senior year when Liberty disbanded its program in the aftermath of a 2005 spring break road trip crash in Alabama involving both of the team's vans. The accident seriously injured a several players as well as head coach John Westfall and his twin 8-year-old sons.

"It was tough," McQuillan said. "What we went through after the accident were very difficult hurdles."

McQuillan returned to take the coaching reins for the Flames when the team was reinstated in 2010, accepting the challenge to rebuild on the foundation of a program left in limbo for four seasons.

The hardship the Flames endured and obstacles they overcame have fueled McQuillan's desire and determination to see the program grow and thrive.

"I'm more passionate about this team and program and the university than I probably would have been if we hadn't hit those roadblocks," he said. "They put me in a position to go back and take care of some unfinished business."

With little time to recruit after being hired in May, McQuillan had to make the most of the on-campus talent that tried out that first season.

"The biggest hurdle we had was letting people know we had a team," he said. "The recruiting process has been much, much easier now because we're a little more of a proven commodity. What gave us a big leg up going into the third season was the addition of the (Liberty Lacrosse Complex). The fact that we can boast one of the best, if not the best, facilities, not just in the SELC but in the entire MCLA is a great selling point."

As McQuillan and the Flames prepare to transition to MCLA Division I this fall, rather than resting on their accomplishments from this past spring, they are continuing to build the program through offseason conditioning and recruitment trips.

For the second summer in a row, McQuillan will travel to Gettysburg, Pa., for the June 27-30 Gait Cup National Tournament before heading up to the July 1-4 All-Canada Lacrosse Games near Toronto, where he will be joined by senior long-stick midfielder Mike Zumpano, now a graduate assistant for Club Sports.

"There are tournaments like the Gait Cup all over the country, but it is the biggest, most competitive one and one we want to make sure we have a presence at," McQuillan said, noting it will draw 30 to 40 teams from as far away as New York, Florida and Texas and individual players from across the United States.

He is actively recruiting eight players who will be there, including two who have already committed, and will keep an eye out for others. Nate Whyte, an all-American defenseman in South Carolina originally from Canada, attended last year's camp.

"Last year was the first year real recruits started trickling in," McQuillan said. "As we hit another summer recruiting opportunity, we won't go out and recruit kids for the fall. We'll be out there getting recruits in for 2014 and 2015."

As Liberty's hockey teams have, McQuillan seeks to attract the interest of players from his homeland at the All-Canadian Lacrosse Games, which will feature 500-plus athletes who have tried out in their respective provinces.

"The Canada Games will definitely have a little more of a competitive vibe and atmosphere," said McQuillan, who compares them to a football combine. "Coaches from many of the elite NCAA programs will be going up there because it's such an awesome opportunity to go to one spot to recruit the best players from all of Canada."

At Liberty, McQuillan hopes to continue a winning tradition that will extend far into the future.

"One of things that's very cool about this team, and exciting for me, is you can go to a lot of teams that have a well-established history, like Princeton and Johns Hopkins and Virginia, and see their foundation of success," he said. "Though we don't yet have that here, I like the fact that we're in the process of building that, and that we've not become stagnant. We're going to continue to push the boundaries. I feel God is very much at work in this team and at this university."