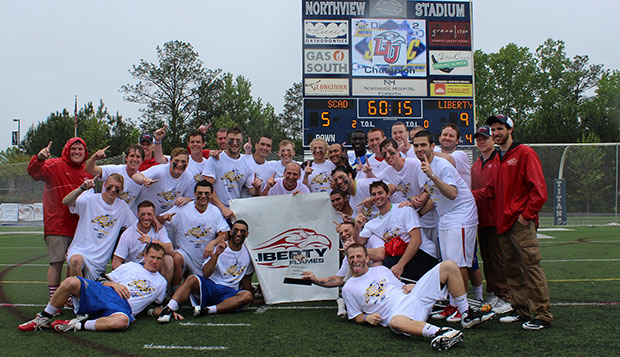 Liberty had eight players selected to the all-Southeast Lacrosse Conference Division II tournament team after it won its first title in only the third season since the program was reinstated.

"It wasn't so bad because I was already soaked," said McQuillan, who led Liberty (16-1) to its first-ever conference tournament title, played in a heavy downpour. "I was still cold, but at least I was already wet. It was just a huge relief. The SELC championship is just the icing on the cake that the guys earned today."

The Flames were just as happy to celebrate in the rain after pouring it on SCAD early, opening a 7-1 halftime advantage before shifting to more of a defensive game plan in the second half.

"It was definitely pouring," McQuillan said of the game played at Northview High School in Johns Creek, Ga., just outside of Atlanta. "Fortunately, we didn't have any thunder or lightning delays. I was very, very impressed in the guys' ability to move the ball, that the rain did not seem to be a factor. We played very, very, very well. From every aspect and every player, we played very good lacrosse today."

The SELC South East Region champion Bees (10-7), ranked No. 22 in the latest Men's Collegiate Lacrosse Association Division II poll, were the seventh ranked team the fourth-ranked Flames had beaten this year, including No. 7 Elon, a North West Region rival, in the last game of the regular season, and No. 6 Palm Beach Atlantic in Friday's SELC quarterfinals.

For the third game in three days, Joe Gargiulo, a 26-year-old  graduate student, stole the show, offensively. The veteran forward netted a first-quarter hat trick and finished with four goals, bringing his tournament total to 17.

"I don't want to say it's the surprise of the tournament, but if we had an all-tournament MVP, it would definitely have been Joe," McQuillan said. "Normally, someone different comes up big in every game so it's not realistic for somebody to step up three days in a row. He led us in goals all three games and led us to an SELC tournament championship."

Fianko sparked the attack by winning nearly all of his first-half faceoffs, and 11 of 18 for the game.

"He absolutely went off today," McQuillan said. "He won the first five or six right in a row and helped us get out to an early lead. He was a catalyst, for sure."

Haywood (second only to Fianko with five ground balls) tallied the game's first goal on an unassisted shot just over a minute into the action.

Kamholtz, who had 14 saves on the day, made a couple big stops early on to steal SCAD's thunder.

"SCAD stopped shooting from outside and tried to get it inside and in the first half, they were not able to get any penetration," McQuillan said. "He was just eating them up. All-around on defense, we were a lot more physical and didn't allow them to get the ball inside."

The Flames seemed to be in complete command after Miller finished one of four assists from Chris Armstrong to start the second-half scoring, stretching Liberty's lead to 8-1. But the Bees rallied to within 9-5 and looked ready to threaten even more after Kamholtz was called for a roughing penalty, giving SCAD a two-man advantage.

"When we went two men down and had Ethan in the box, I felt like if we left the door open at all, it was definitely at that point," McQuillan said. "Fortunately, we were able to limit them to two shots and kill off the rest of that penalty. It definitely was a relief."

The victory should give Liberty the momentum it needs heading into the May 13-18 MCLA Division II national tournament in Greenville, S.C.

"The fact we're going as SELC champion is a huge shot in the arm in terms of nationals," McQuillan said. "Realistically, we have an opportunity to make a run at a national championship. That will be our last time competing at Division II, so we want to go out with a bang, to provide more proof that we're ready to move up to Division I."

Liberty's only loss this season came at Richmond, a Division I team moving up to the NCAA level.