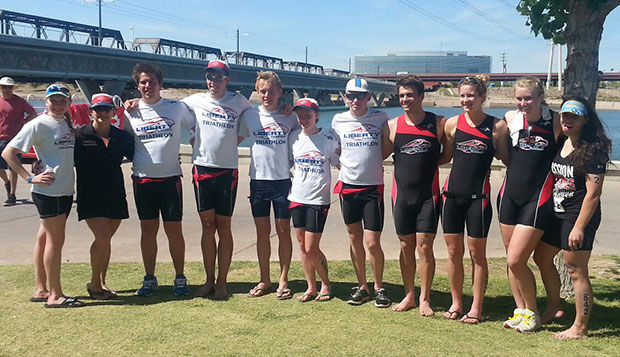 Liberty University sophomore Joseph Anderson finished 31st out of 1,001 total runners, including 595 men, in the Olympic distance race at this past Saturday's USA Triathlon Collegiate National Championships in Tempe, Ariz.

The race started with a 1,500-meter swim followed by a 40-kilometer bike stage and 10K run.

Anderson got faster and moved up in the field as the championship triathlon went on, improving his place in each of the three phases.

"He did particularly well," Liberty head coach Beth Frackleton said, noting Anderson finished near the fifth percentile. "Any time you can place(close to) 30th out of (nearly) 600, that's pretty good."

Arizona's Ben Kanute, who came in first  out of 68 finishers in the draft-legal sprint, also won the main event in 1:46:36.

The University of Colorado (3,926) edged the University of California (3,924) by two points to capture its fourth consecutive combined national team title, though California actually won the women's team competition and finished runner-up among the men. Liberty finished 36th out of 104 teams with 2,002 combined points, with its women 35th with 1,113 and its men 41st with 889.

Whereas the men's race started at 7:40 a.m., the women didn't get into the water until nearly 11 a.m., when the temperature in Tempe had soared to close to 90 degrees.

"The two girls placed well, being in the top third of the field, and everybody improved," Frackleton said. "This was their first Olympic distance for a couple of them, so to be in such a competitive race in such extreme heat, I was proud that they all finished."

"It's definitely been a rebuilding year but thankfully, some of the younger ones were able to go and get exposure to see what the competition is like from across the country," Frackleton said.