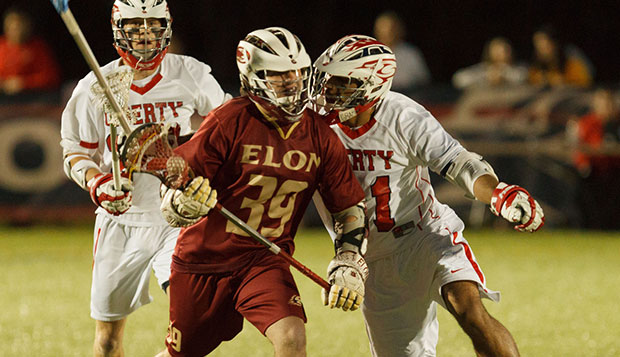 Last year, Liberty University's men's lacrosse team's season ended at the hands of Elon, which beat the Flames in the Southeast Lacrosse Conference tournament by one goal, just as it had in the regular season.

Friday night at the Liberty Lacrosse Complex, it was payback time as Liberty (13-1, 4-0 SELC, ranked No. 5 in the Men's Collegiate Lacrosse Association Division II poll) rallied from an early three-goal deficit to win by one goal, 11-10, in the regular-season and home finale, ending a four-game losing skid against the Phoenix (9-2, 3-1, ranked No. 8).

"It's always a big rivalry," freshman midfielder Bryce Mrakovich said. ""It just went back and forth the whole game and it was awesome. I loved it. They definitely brought their A game. We just had to deal with adversity and our team did really well to pull it out. We're probably going to see them in the playoffs, we're hoping in the championship game, because that would be the best we could hope for."

The Flames clinched the No. 1 seed for the SELC playoffs, which start in two weeks in Atlanta.

Freshman attack Ryan Miller scored four goals to ignite the attack, which was held to two goals in the first quarter and one in the third, and Mrakovich added three goals and picked up seven ground balls to make an impact on both sides of the field.

"How big have they stepped up for us this season?" Liberty head coach Kyle McQuillan asked rhetorically. "Both of them just had phenomenal games tonight. The fact that they are so young and they play so big in these games is just huge. I just get excited thinking about how great a career that both of them are going to have as they grow together in this program."

With the game knotted at 7-7 with 10 and a half minutes left in the fourth quarter, Miller regained control of the ball after starting a run on goal and spotted Mrakovich down in the left crease for a go-ahead finish.

Kurt Tobias (three goals, four ground balls) added a quick goal off a feed from Joe Gargiulo to make it 9-7 just 34 seconds later before Elon rallied to tie it at 10 with 4:49 left in regulation on a wide-open shot in front of the cage.

Two minutes later, Mrakovich netted the game-winner on a running shot from the left side.

"I just gave it everything I had and hoped that it went in," he said. "It was a great way to go out, especially for our seniors. We wanted to give them everything we had and that's what we did."

The Flames utilized their four-corner offense and showcased their speed to run out the final 53.8 seconds after Tobias picked off a pass near midfield.

"That's a situation we haven't been in ever this season, having a lead and it being very close and having to protect that and we were able to do that so it was a good learning opportunity," McQuillan said.

Liberty sophomore goalkeeper Ethan Kamholtz made 14 saves, including  two from point-blank range in the first quarter with the Flames trailing 3-1. Midway through the third period, Kamholtz put a pancake check on Elon senior attack Dan Johnson in front of the goal. He also sparked the transition game a few times by coming out of the cage after making a save.

"Ethan really took ownership of that net and he changed things and he was really a big part of turning the game around in the second half," McQuillan said. "He hangs on the ball a little bit too much for my comfort, but again, he's very elusive with that ball and he was able to possess it and just give Elon something else to have to deal with, someone else to have to cover. You don't usually see a goalie take that much leeway with the ball, but he's got the ability to do that. He always is kind of a spark plug to that fast break transition offense."

The victory wasn't as authoritative as McQuillan and the Flames were looking for, but they celebrated their long-awaited regular-season championship in style, rushing onto the field and greeting the home crowd.

"We were hoping for a little bit more of a decisive win, but at the end of the day, you've got to be happy," he said. "A win is a win. It's the eighth-ranked team in the country and any time you have two top-10 teams playing one another, you've got to expect it to be a pretty good battle and that's what we had tonight."