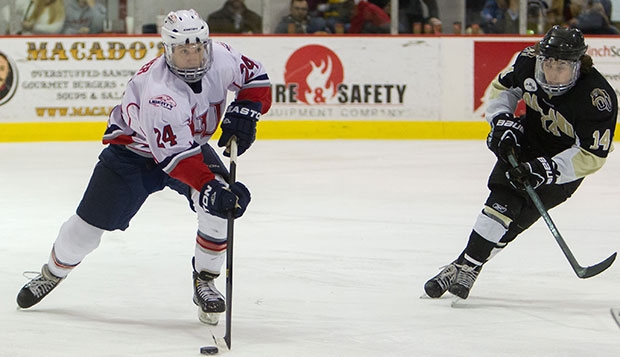 Flames forward Rick Turner, who ended his career as Liberty's fourth-highest all-time scorer, beat 40 all-star players in the shootout. He is planning to take his game overseas next year.

As if his senior season wasn't sensational enough, when he led the Flames with 43 goals and 32 assists, Liberty University forward Rick Turner put on a spectacular show Saturday at the sixth annual American Collegiate Hockey Association Division I all-star game, hosted by Ohio University at Bird Arena in Athens, Ohio.

Turner, a forward who ended his career as Liberty's fourth-ranked all-time scorer, won $100 for finishing first in the shootout and placed second by a tenth of a second in the "fastest skater" competition. He also received plenty of playing time and scored one goal in the actual game when his team, the Red squad, defeated the White all-stars, 12-9.

"It was all offense," Turner said. "There definitely was a lot of talent out there and crisp passing. It was a good, fast-paced game so you could use your speed and your skills as much as you wanted. They rolled four lines, probably a good 30 or 40 seconds on each one, so I got to play quite a bit."

For the skills competitions, he finished first in the shootout and second in the fast skate out of a field of 40 players.

"It was a great experience," said Turner, who returned to Lynchburg on Sunday an hour before his teammates arrived from Washington, D.C., following their spring break mission trip to Latvia. "It was a good time in a fun atmosphere. It was nice to mingle with and compete against a bunch of the guys from around the league."

Goal tenders from Ohio, Niagara, Adrian, and Robert Morris Illinois platooned between the pipes as the 40 players took turns making skates on goal.

"They had four goalies rotating in and out," Turner said. "Every guy went once in the first round, took a shot and then whoever made it went to the second round. Ten guys went into the next round and I was the only one who scored so I ended up winning it. I just went in both times and went five-hole, the first time forehand and second time backhand."

For the fastest skater competition, players were clocked one at a time in a sprint around the rink.

"You'd just start at the red line, go around the whole ice once and end up at the same red line and they time you from start to finish," said Turner, who was edged by Brett Agnew, a junior forward from Ohio.

Turner hopes his senior season at Liberty and all-star performances serve as springboards for his professional playing career after graduation, most likely overseas.

"Actually, there's a good possibility of going over to Europe next year and playing over there," he said. "It's not set in stone yet. I'm talking to an agent right now and I'll probably have him in a week, legalized. There's a lot of leagues (so) he'll start looking around for teams for me and he'll figure out what's the best fit for me."

A day after returning from spring break with his family in Auburn, Mich., and the All-Star game in Ohio, Turner was back in the LaHaye Ice Center, working out with his teammates on Monday afternoon.

"Just staying fresh, staying in shape," Turner said. "Whenever they call, I've got to go. That's why I'm here every day."

He hopes to launch a successful career overseas and potentially return to the United States to build on it in the near future. For now, he is looking forward to the cultural experience of playing in Europe.

"Absolutely, it'll be a good time, definitely to represent the school well and hopefully get more guys from here over there," Turner said.