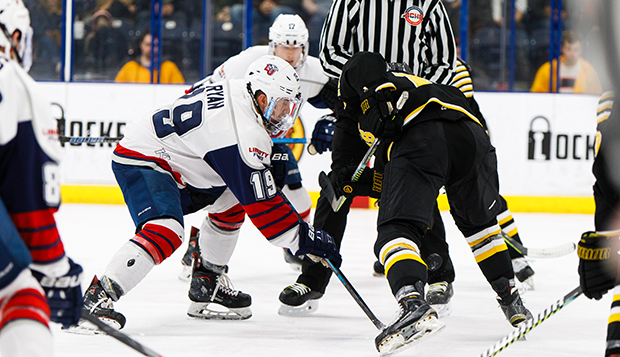 Anticipation is in the air for Liberty University's ACHA Division I men's hockey team's only road trip of the fall semester, which has the potential to be monumental.

The Flames, who ended last season at an all-time high No. 2 national ranking, left early Wednesday morning for an 11-hour trip to previously top-ranked Adrian (Mich.) College for an early showdown between ACHA superpowers, set for Thursday at 7 p.m. and Friday at 3 p.m.

"It's a great rivalry between the two schools," Liberty Head Coach Kirk Handy said. "We will always push each other to make the other better, which is why we enjoy playing each other so much."

Liberty ended the Bulldogs' undefeated season with a two-game sweep at the LaHaye Ice Center late last February. At the time, it seemed that might have been a preview of the ACHA DI National Championship finals near Dallas. However, that tournament was canceled by COVID-19 and Adrian maintained it's No. 1 ranking.

This week's rematch will have limited fans on hand due to ongoing restrictions in the midst of the pandemic. Liberty is winless in four previous meetings at the Arrington Ice Arena. The Flames were also eliminated by Adrian from the 2012 ACHA DI National Championships, played at a neutral site.

Handy expressed appreciation to Club Sports Assistant Athletic Director for Sports Medicine Angie Wit, graduate assistant Jackson Lohr, the team's primary athletic trainer, and the rest of the training staff and the university for enabling the Flames to continue practicing with COVID-19 prevention measures, including regular testing requirements, in place.

He is working on adding series to a projected 20-game spring semester schedule. That is because not all of the Flames' ESCHL opponents have confirmed that they will compete as planned in this, Liberty's fifth and final season in the conference. The Flames will rejoin the independent ranks next fall, which is where they played their first 11 seasons at the Division I level.

All-Time Series: The Bulldogs lead 9-2, with the Flames winning their first two games in the series last Feb. 21-22 at the LaHaye Ice Center.

Liberty Scouting Report: Handy is excited about the offensive firepower he has to work with this season, a healthy mix of veteran leaders and proven scorers as well as an influx of freshmen talent that is eager to make an impact.

"We're pretty set on our line combinations right now and feel good about them, absolutely," he said.

Forwards and team captains Brock Thompson, Quinn Ryan, and Cole Gammer anchor the Flames' attack, with Gammer netting a hat trick and Ryan contributing a goal and two assists in Liberty's 7-2 season-opening win over North Carolina State on Oct. 23 at the LIC. The line of sophomore Brett Gammer and freshmen DJ Schwenke and Kris Bladen have shown tremendous potential to be a potent scoring trio behind the second-line combination of Thompson, sophomore Matt Bartel, and freshman Jason Foltz.

"Those (freshmen) guys know our seniors are going to lead the way (against Adrian)," Handy said. "Hopefully, the younger guys will be able to see the level of play and respond appropriately."

In goal, the Flames feature three outstanding options for Assistant Coach Dan Berthiaume to choose from — sophomores Hunter Virostek and Cedric LeSieur and junior Tyler Myers, who played the entirety of the game against the Icepack between the pipes.

Adrian Scouting Report: The Bulldogs, who swept their opening exhibition series against the Soo Eagles of the Northern Ontario Junior Hockey League (NOJHL) by 5-2 and 2-0 scores, feature eight seniors, five juniors, seven sophomores, and seven freshmen on this season's roster. Senior defenseman Dan Stone is Adrian's team captain. It's high-powered attack is paced by junior forwards Manny Silverio and Brendan Stenko, who both scored more than 20 goals and distributed more than 20 assists last season, as well as sophomore forward Connor Smith and junior forward Tyler Fyfe who finished ranked third and fourth in scoring, with Fyfe netting a team-high five game-winning goals, one more than Stenko and Smith.

Coaches: Handy is in his 21st season as Liberty's head coach and has compiled an overall record of 465-184-29. Adrian's bench is patrolled by Gary Astalos, who is 132-9 in his fifth season at the helm.