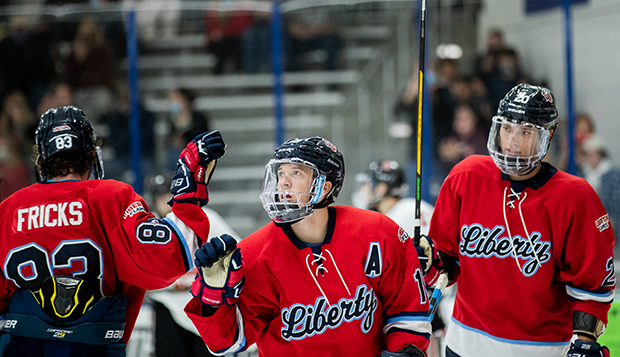 Following its fifth season of competition in the Eastern States Collegiate Hockey League (ESCHL) this spring, Liberty University's ACHA Division I men's hockey team will become an independent program, as it was for the first 10 seasons after moving up to the ACHA DI level in 2006-07.

"We just made the tough decision we will be leaving the ESCHL and going independent again next season," Flames Head Coach Kirk Handy said. "The biggest thing for us is flexibility of schedule. We felt it would be a good opportunity for us to play more opponents (from different regions of the ACHA). We are going to continue playing our conference schedule in the spring, but we wanted to get ahead of the curve with schedules starting to fill up for next season."

"We've had a great run," Handy said after announcing the team's intentions to ESCHL Commissioner Dom Bellizzie on Wednesday. "We have had nothing but great rivalries within the ESCHL and have nothing but respect for all of the teams in the conference. We will continue to play many of them going forward."

The Flames still have two weeks to prepare for their only road trip and final action of the fall semester, Nov. 12 at 2018 ACHA DI national champion Adrian College, where they will also play Indiana Tech on Nov. 13.

After completing regular-season play in the spring semester, with 14 of 20 opponents from the ESCHL, Liberty will again travel to West Chester, Pa., to contend for its fourth and final ESCHL Tournament championship from March 26-28.  The Flames are still waiting to find out the location of the ACHA DI National Championships after the league opted to divide that tournament, originally scheduled for April 10-15 in Boston, into five separate sites.