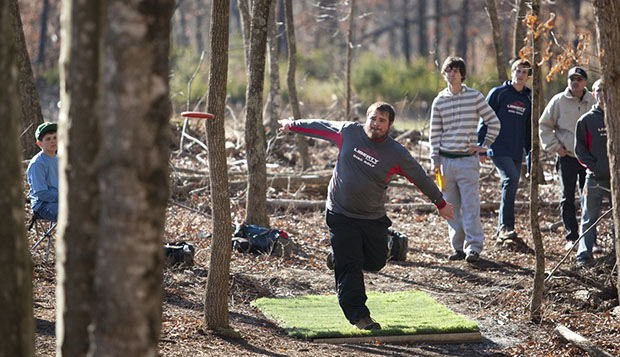 Flames senior Devin Swartz tees off during Friday's first round of the Liberty Flamethrower, a national qualifier.

The event, held on Liberty's 20-hole East Campus course, was one of the last qualifying tournaments for the April 4-7 National Collegiate championships in North Augusta, S.C. The Flames trailed UNC Charlotte after Friday's first round, played in windy conditions, before rallying with an exceptional performance under picture perfect skies on Saturday.

"We had an incredible second day of disc golf and took home all the trophies," Liberty head coach Steve Bowman said. "We were four strokes down after the first round of singles on Friday and picked up three strokes in the doubles round on Saturday." 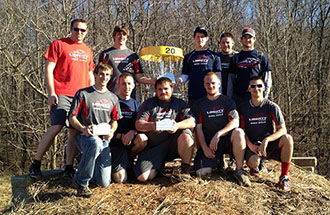 Andrick, Brown, Laubscher, and Swartz, who each competed at last year's nationals, all played on one card and fired a 61.

"In the last singles round, the guys picked up nine strokes to really secure the team title," Bowman added.

He said playing on their home course didn't help the Flames as much as he'd hoped on Friday, but it definitely did on Saturday.

"Friday was really windy, with very big gusts of wind," Bowman said. "To us, we were at an advantage because we practice in it all the time (but) we weren't able to cut through the wind and keep the discs low.

"On Saturday, mentally, they were ready to go," he added. "I told them, ‘Hit your shots that you know you can hit and play the safe ones when you need to,' and we ended up faring really well."

The Flames earned the automatic national qualification with a first-place total of 452. They beat UNCC (460) and defending champion East Tennessee State (466), which had already qualified for nationals after placing in the top 16 in North Augusta last year.

Andrick (74-65-139) improved his score on Friday by nine strokes to best Brown, who had an off day Saturday.

Liberty's B team, playing in place of Massachusetts which couldn't make the trip, finished fourth with a score of 497.

"When we go to nationals, they'll be playing on the B card in the first flight tournament (while the others compete in the national tournament field)," Bowman said. "There will be 25 teams that play and the winners get an automatic bid to nationals for the 2014 championships."

The Flames have three weeks to prepare for this year's national tournament, a four-day event that features 40 teams on the A card. The top 20 teams after the first two days will play a total of seven rounds, three singles and four doubles.

"We're definitely prepared for it mentally and we're physically ready, too," Bowman said, noting there will be one round of doubles on Thursday and Sunday sandwiched around two rounds of doubles on Friday and three rounds of singles on Saturday. "That's a lot of disc golf, with a lot more doubles competition, which is good because our guys are really strong in doubles."