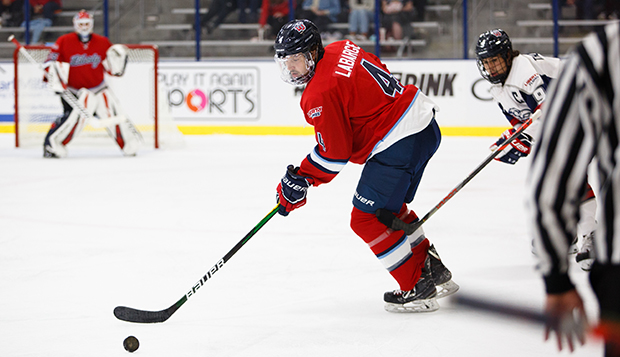 Flames freshman defenseman Trey LaBarge skates the puck out from along the boards during the Oct. 9 intra-squad scrimmage at the LIC. (Photos by Luke Bobbey)

Four practices per week over the past two months may have prepared Liberty University's ACHA Division I men's hockey team more than necessary for Friday night's long-awaited season-opener against North Carolina State, set for 7 p.m. at the LaHaye Ice Center.

"We're just excited to give our guys an opportunity to compete against another team," Flames Head Coach Kirk Handy said. "You get to a point in practice where you want some game application, so it will be really good to be able to play."

"We can't take them lightly," he said. "We'll still have to play our game. Hopefully, it will be a good game for us to get our feet going and get the feel of playing real hockey again since it's been a long time since we've played an actual game. I think it will be a good test for the team to see what we're made of and see what we need to work on for the rest of the season."

Handy has high hopes and great expectations for this year's team, which is loaded with veterans supplemented by a talented eight-man recruiting class.

"We're excited about the group of guys we have here," he said. "We believe that they all have a special part to play on this team and God brought them here for a special purpose. We are really looking forward to seeing what God's going to do with this team."

He said the core group of upperclassmen will have invaluable leadership roles in a condensed spring schedule, when the Flames will play their entire ESCHL schedule before starting tournament play.

"We've seen them do great things here in the first part of the season as we've been getting ready and working to get going here, so I only anticipate as we get into game play that we'll see them continue to do great things for us," Handy said. "Our goal this year is to be the best we can be when the first game hits and then continue to improve from there. We want to focus on our mindset, on the preparation, and on the execution. That's going to be really important for us."

The Flames will conclude fall semester play by traveling to challenge 2018 ACHA DI national champion Adrian (Mich.) College on Nov. 12 and Indiana Tech on Nov. 13. Liberty split four games with the Bulldogs last season, dealing the top-ranked team in the nation its only two losses in a Feb. 21-22 sweep at home.

All-Time Series: This is the teams' first meeting since Liberty moved up to the ACHA DI level in 2006.

Liberty Scouting Report: The Flames are coming off arguably the best season in Liberty Hockey history after winning their third ESCHL regular-season and tournament championships in their fourth season in the league.

Liberty returns three of its four 50-point scorers from last season — senior forward Quinn Ryan, junior forward Josh Fricks, and senior defenseman Garrett Nelson, who will miss Friday's game with an injury. Sophomore defenseman Colin Baird, who scored 31 points and became the first defenseman in the 18-year history of the award to be named ACHA DI Rookie of the Year, will be relied on even more than usual on the D corps, with support from graduate alternate captain Chaydan Lauber and Dmytro Kobylyanskyi, a senior from Ukraine. They are supplemented by senior DII call-up Alex Norwinski and freshman recruits Trey LaBarge, Thomas Nagle, and Tristan Slot.

At the Blue & White intra-squad scrimmage on Oct. 9, the freshman forward combination of DJ Schwenke, Kris Bladen, and Jason Foltz each scored a goal for the white team by the end of the second period. Ryan and senior forward Cole Gammer accounted for all three goals for the red squad.

The Flames feature three second-year goalies coming off stellar rookie seasons, giving Assistant Coach Dan Berthaiume a wealth of talent call upon in the cage. Junior Tyler Myers is complemented by sophomores Cédric Le Sieur and Hunter Virostek, who started the majority of games for the Flames after joining the team last spring.

The Icepack's forward lines are strengthened by juniors Alex Robinson (23G, 24A, 47 points) and Parker Szarek (22G, 25A, 47 points) — who both scored goals against Liberty's ACHA DII team in the 2019 Southeast Region tournament  — and junior Riley Johnson and graduate Laythe Jadallah (17G, 25A, 42 points apiece).

Coaches: Handy enters his 20th season at the helm of the Flames' DI squad with a career record of 465-184-29. He was named the ACHA Men's Division I Coach of the Year for the first time after the 2019-20 season. The Icepack is in its first season under the direction of Head Coach Tim Healy, the former assistant coach who makes his debut Friday night. He replaced Mike Gazzillo, who stepped down after 10 seasons at the helm with three ACCHL titles and one ACHA DII national championship appearance in 2019, when NC State (then 27-0) ousted the Flames' DII team in the regional final at the LIC.