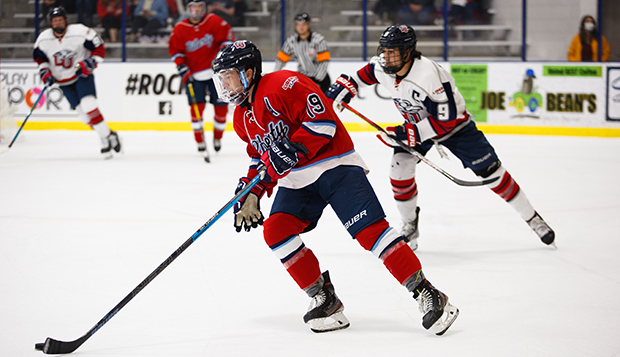 As head captain Brock Thompson (right) closes in, senior forward Quinn Ryan maneuvers the puck up the ice on Friday night. Ryan netted a goal and two assists to fellow co-captain Cole Gammer in a 5-3 setback. (Photos by Luke Bobbey)

If practice makes perfect, Liberty University's ACHA Division I men's hockey team is about as close to that standard as it can get at this stage of the preseason, as it showcased during Friday night's Blue & White intra-squad scrimmage at the LaHaye Ice Center (LIC).

"The guys prepare and practice and to have something where they get to put it into more of a real live game situation is good for them, and the fans," Flames Associate Head Coach Jeff Boettger said. "It's fantastic to be able to have people out (to watch)."

After a month of sharpening one another and refining their skills through on-ice drills, as well as off-ice weight training and conditioning, the Flames played with a crispness matching the early fall air outside and kindled excitement within the rink among the 1,000 fans allowed to watch the live action.

"It was evenly matched and it was up and down," Boettger said. "It was more real and we had official refs brought in which made it that much more intense. The guys skated hard and did what they needed to do."

A talented trio of goalies — sophomores Hunter Virostek and Cédric LeSieur and junior Tyler Myers — rotated between the two teams with all three playing two periods. The three goalies stopped all four penalty shots on the night, awarded to three defensemen for the white team and one forward for the red.

"We thought It'd be fun for the fans, create more excitement and energy there," Boettger said of the penalty shots, noting that there were no power plays or penalty kills, but continual five-on-five action which allowed more players minutes on the ice instead of in the box. "Our goalies are so lights-out in the shootouts. All three battled and played tough."

The line that made the largest impact was the freshmen trio of DJ Schwenke, Kris Bladen, and Jason Foltz, who each scored a goal for the white team by the end of the second period.

"The young side of white gave us a little more jam in the first two periods and that was exciting to see," Boettger said. "They're just starting to come alive and to learn their role and who they are on the team. Guys were getting used to each other and figuring out who they jive with and where the chemistry is. That's part of the reason why we play these games."

Flanders, the leading scorer on the DII team last season, started the scoring just over two minutes after the opening faceoff, slipping the puck past Virostek from the right circle after battling through the defense.

Schwenke, stationed in the left crease, tipped freshman defenseman Tristan Slot's shot from the left point past Myers for a 2-0 advantage with 14:42 left in the first period.

The red squad cut the deficit to 2-1 on the first of two goals by senior forward Cole Gammer, who chipped in a putback of a point-blank shot by junior forward Josh Fricks in the left slot at the 8:45 mark. Virostek stopped the bleeding for the red squad by blocking three high shots from the perimeter late in the first period.

Early in the second, the white team's second line capitalized on a counterattack with Bladen and Schwenke setting up Foltz who sneaked a shot under the glove of LeSieur. Late in the stanza, Bladen punched in an assist from Foltz from deep in the left crease off a steal in the offensive zone.

Gammer set up senior forward and fellow captain Quinn Ryan with an entry pass from the high slot before the Flames' leading scorer from the past two seasons slipped the puck under the pads of LeSieur to cut the deficit to 4-2 at the 14:27 mark of the third.

Doe capped the scoring for the white team, stretching its lead to 5-2 with 10:26 to play by stealing the puck on a clearing attempt, pivoting near the right boards, and launching a wrist shot from the center of the circle that beat Myers top shelf.

The red team struck back for the final score with 8:20 to go when Ryan won a faceoff in the right circle to Gammer, who's shot through traffic in the high slot sneaked past LeSieur inside the right post.

"Those are the guys that were buzzing, especially in the third period," Boettger said of Gammer and Ryan, complemented by Fricks. "That line is always going to be a danger. You have to respect them because they can play the game. Those guys want to play, they want to be on the ice. They want to be looked to as the guys to go to and they definitely did step up in the third period."

Boettger was pleased with the overall performances on both sides and for the opportunity to evaluate the players two weeks before their first game against an outside opponent, with North Carolina State visiting the LIC on Oct. 23.

"It's a start," he added. "Having the game mentality side of it really allows you to prepare a little bit better, see things in a different light, so we'll watch the video and use it as a teaching tool for the guys." 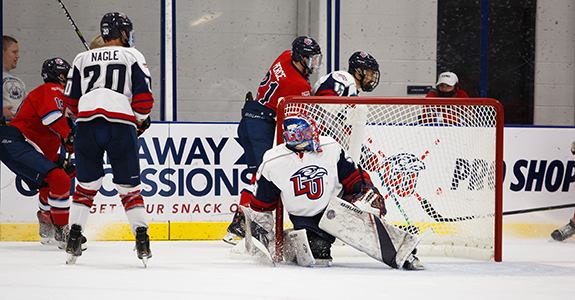 Junior goalie Tyler Myers guards the cage for the white squad before ending the game with the red.