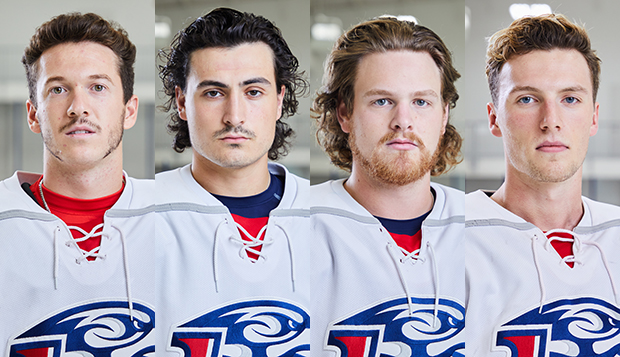 Seasoned veterans are a staple of this season's leadership corps for Liberty University's ACHA Division I men's hockey team, with the four team captains selected by Head Coach Kirk Handy and his coaching staff bringing a wealth of experience with the Flames into the 2020-21 season.

Three of the captains — forwards Brock Thompson and Quinn Ryan and defenseman Chaydan Lauber — are exercising an optional fifth year of eligibility with the fourth, forward Cole Gammer, entering his senior season.

"We feel all four of these guys embody who we want to be as a program and that's super important to us," Handy said. "They are great representatives of our culture here at Liberty and they honestly represent the team well from on- and off-ice perspectives. They have all grown in their faith and succeeded academically and athletically."

Thompson, the only returning member of the Flames' captaincy from the 2019-20 squad that finished 33-4 and ranked second in ACHA Division I, was promoted to head captain with Gammer, Lauber, and Ryan serving as alternates.

"It's an absolute honor and I am proud to be the captain of this group of guys," said Thompson, "It means a lot to me, something I've wanted to be working towards every day as a leader of this team."

He served in the same role for the Tampa Bay Juniors the year before arriving at Liberty and as an alternate on two previous teams.

"I've had great opportunities to learn and to grow throughout my hockey career, to learn the roles and responsibilities that come into play once you are given those titles," Thompson said.

Thompson arrived in the same recruiting class as Lauber and Ryan and has grown to be close friends with both throughout their careers.

"The fact that they're still here for their fifth years says a lot about their character and how much the school means to them," Thompson said. "Quinn has always been the team's on-ice leader. We all look up to him and how he plays. He does everything right and he's the hardest worker on the ice."

He holds Lauber and Gammer in equally high esteem and looks forward to working with them, though he was on opposite sides of all three at Friday night's Blue & White intra-squad game at the LaHaye Ice Center.

"Chaydan is someone who does the little things right and brings a joy and a presence to every room that he's in, and Cole Gammer has really matured since he's been here," Thompson said. "He has really grown in his faith and in his life and is a very motivated person. Everything he does is intentional and he's going to be an awesome leader this year."

After completing his B.S. Degree in Strategic Communication in May, Thompson realizes this will be his last season of competitive hockey and wants to make it count as the Flames pursue their first ACHA DI National Championship, April 15-20 in Boston.

"I've wanted to take this last year as seriously as possible but also be able to enjoy it the most," said Thompson, who started his M.A. in Communication this fall. "I want to do everything I can to leave a legacy, to cherish the culture here, and to spread the love of Christ to the teams we play against and in the locker room and around campus."