Re-ignited DI Flames to test their depth in Friday's scrimmage 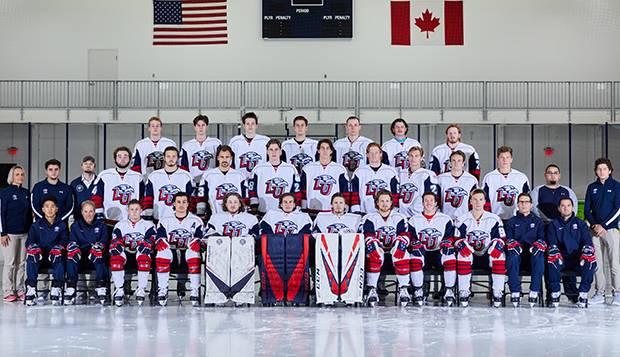 Two weeks before beginning its season-long journey to Boston, site of the April 15-20 ACHA National Championships, with a season-opening showdown against North Carolina State on Oct. 23, Liberty University's ACHA Division I men's hockey team will showcase the talent Head Coach Kirk Handy has to work with this season in an inter-squad scrimmage this Friday at 7 p.m. at the LaHaye Ice Center.

"That will be a lot of fun," junior forward Matt Bartel said. "It's always weird playing against your own teammates, but they're going to make it feel like a real game for us. With an atmosphere like this, it's real special and I'm really looking forward to it."

Tickets are available online on the Flames' ticket website.

The showdown will mark Liberty's first appearance on the ice since capturing its third ESCHL Tournament title in four seasons by shutting out Stony Brook in the March 8 final at West Chester, Pa., improving to 33-4. Five days later, as the Flames prepared to travel to Texas to contend for their first ACHA Division I National Championship, COVID-19 denied the second-ranked team in the nation the opportunity.

Handy said Friday's scrimmage will allow the Flames' coaching staff to assess the strengths and weaknesses of the nine new additions to the 24-man roster, including six freshmen, two sophomore transfers and senior defenseman Alex Norwinski, a call-up from Liberty's Division II team.

"We have a great group of new players that are competing hard in practice and they're working hard, which has been really nice to see," he said. "We're really happy with the group that has come in. Our freshmen have a lot of energy and enthusiasm."

"They're new and they're excited for everything, so I think they'll definitely be buzzing once the season starts and they'll bring a lot to the table to help us be successful," Bartel added.

Handy said the Flames' upperclassmen — including graduate forwards Brock Thompson and Quinn Ryan and defenseman Chaydan Lauber, along with senior Garrett Nelson, back for their fifth seasons of eligibility — will set the tone for the rest of the team.

"We really have a great group of sophomores, juniors, and seniors who will help us lead our team this year," he said. "They know the standard that we have to play at, not just at the end of the year but practice-in and practice-out. So we're excited to have them pass that vision onto the younger guys as we try to achieve our three on-ice goals — winning an ESCHL conference regular-season title, winning the ESCHL Tournament, and then winning a national championship."

Sophomore defenseman Colin Baird, last season's ACHA Division I Rookie of the Year, said the returning players have set the bar high for the newcomers, leading by example.

"We've been sure to make our intensity is super high, so that they know to match that and they know how hard they have to play to be at this level, and I think we're doing a great job at doing that."

Handy said the seniors have more to play for than a national championship trophy.

"They want to leave a legacy here and they want it to be more than just about wins and losses," he said. "They want it to be where guys can come here and set a strong foundation for the rest of their lives through being part of the hockey program. We want to make sure that we do our part in maintaining that consistency, where even when we aren't playing every weekend, we're still creating a great environment around our program for guys to grow in their faith and as men."

Baird, who stands 6-feet, 5-inches tall and weighs 200 pounds, said while size is an advantage among the Flames' defensive corps, speed is the Flames' greatest strength overall.

Bartel is looking forward to being reunited with Bethel University transfer Zak Albers, a former teammate of his on the Utah Outliers Junior Hockey team.

"We are similar types of forwards," he said. "Both of us like to use our bodies to create space and throw hits and create energy and use our size to protect the puck. Hopefully, we can link up together again this year and maybe play on the same line and put some pucks in the net."

He said the Flames' top line of Ryan, junior Josh Fricks, and senior Cole Gammer will likely generate most of the offensive firepower.

"Right now, I'm on the same line with Brett Gammer and Brock Thompson," Bartel said. "I can bring some physicality and offense to the table, and Brock's got a great shot and Brett's a reliable centerman, good on draws, so, obviously, we're a pretty versatile line."

As they did last spring, the Flames feature an extremely talented trio of goalies — sophomores Hunter Virostek and Cédric Lesieur and junior Tyler Myers.

Bartel said with a shortened season — Liberty will play 20 of its 23 games, including all of its ESCHL contests, in the spring — the Flames will need to come out firing on all cylinders in the New Year.

"We definitely need to have that sense of urgency going into the start of the regular season because … there's less time to get fine-tuned before we go to nationals," he said. "Right from puck drop in January, we need to be on our game and be working together and building momentum going into nationals to give ourselves a good chance to get that win."

After the Oct. 23 opener against the Wolfpack, the Flames will conclude fall semester play by traveling to challenge top-ranked Adrian College (Mich.) on Nov. 12 and Indiana Tech on Nov. 13. Liberty dropped two games at Adrian last October before sweeping the undefeated Bulldogs Feb. 21-22 in Lynchburg, Va.