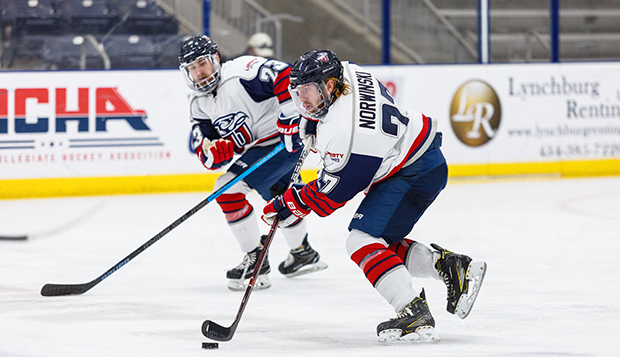 Originally from Roanoke, Va., where he grew up watching the East Coast Hockey League's (ECHL) Roanoke Express while playing for the Express and Lynchburg Coyotes youth programs, Norwinski, 23, played two seasons of Junior "A" hockey in Texas before enrolling as a freshman at Virginia Western Community College in 2017.

He launched his collegiate career on the Flames' Division III squad as a sophomore before moving up to the Division II level last season and landing a spot on the DI roster after tryouts early this month.

Rather than be dejected, he swallowed his pride and laced up his skates, bringing everything he had onto the ice for the DIII team that season. He scored 10 goals and distributed seven assists before being promoted to the DII squad in the spring.

"Looking back at it, I agree with the coaches' decision to cut me," Norwinski said. "Getting the game-time experience at the Division III level helped me ease back to playing hockey and kept me humble about where I was at moving up the rankings."

A season and a half spent at the DII ranks, where he contributed more than 15 goals and 15 assists in 2019-20, prepared Norwinski to make a seamless transition to the DI team for his final year at Liberty.

"My DII coaches, (Head Coach) Ben Hughes and (Assistant Coaches) Matt Cruickshank and Christian Garland helped mold me into the player I am," Norwinski said.

At 5-feet, 7-inches, 180 pounds, Norwinski may be the smallest player in the Flames' defensive corps next to graduate Garrett Nelson.

"I try to play a physical game, and don't back down from anyone based on their size or ability," Norwinski said.

Though he has proven himself to be a potent scoring threat with the DII and DIII teams, Norwinski describes himself as more of a stay-at-home defenseman.

"I have ability to read the plays well, and predict where the puck will go next," he said. "I definitely will jump in and join the rush and try to make a play in the offensive zone if I get it, but I don't want the puck on my stick for too long."

Norwkinski said he prefers to set up the Flames' extremely dangerous forwards with controlled passes, sparking fast breaks for his teammates..

"All of the forwards from the first line to the fourth are talented and smart, and have great playmaking abilities," he said.

After working in front of exceptional DII goalies Adam Partridge and Dakota Cyhaniuk at the DII level, Norwinski is excited to have sophomores Cedric LeSieur and Hunter Virostek and junior Tyler Myers behind him this season.

"They are very good at tracking the puck and very quick in the net," he said. "That will be a huge load of stress off my back that we have three solid goalies in the net, and I feel comfortable with any one of them playing."

His communication skills improved tremendously during his seasons spent on the DIII and DII squads.

"That's half the game, communicating and being loud on the ice for your teammates to hear you," Norwinski said. "I always try to keep the net clear in front so the goalie has a good eye for seeing the puck when it's shot at him, and that comes with a lot of communication."

He has been impressed with the professionalism of all three levels of Liberty's hockey program.

"It's a very positive culture, a positive atmosphere in the organization as a whole, through all divisions," Norwinski said. "All of the players are very respectable, very friendly and welcoming. They are Christians first before they are hockey players, and that includes players on the women's team as well."

Having so much to play for this season has helped players on the DI team maintain high morale and a diligent work ethic as they prepare for the Oct. 9 Blue & White intra-squad scrimmage and the Oct. 23 season opener against North Carolina State at the LaHaye Ice Center.

"We're all getting excited to get to be able to play some games this semester and are very blessed to be able to do that," Norwinski said. "We are excited to finally play in front of our home fans and represent our school on the ice."

Norwinski felt badly for the seniors on the DI and DII teams who were denied by COVID-19 the opportunity to travel to Frisco, Texas, in March to contend for their first national titles. However, he is thrilled to join the seven other seniors on this season's DI roster on their quest to advance to Boston for the April 15-20 national tournament.

"Every year, it's exciting to start the season knowing you have a chance to go all the way, to get a banner with your team's name on it," Norwinski said.

As a sales management and professional selling major in Liberty's School of Business, with a minor in Strategic Intelligence in Helms School of Government, Norwinski plans to join his father's business, Norwinski Insurance Agency, in Roanoke after graduating in May.