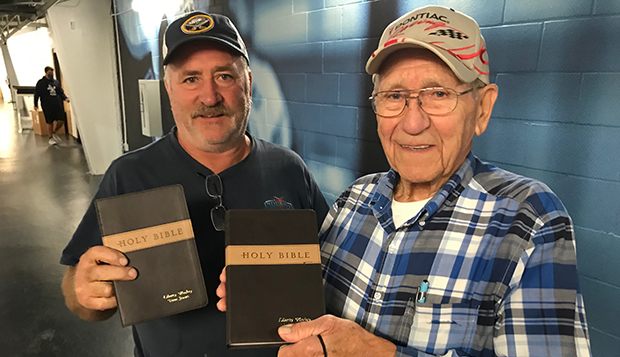 Brian Lowman and his father, Ray, display samples of the King James Version Bibles they presented to the team.

Longtime Liberty University men's hockey fans Brian Lowman and his father, Ray Lowman, presented players and coaching staff of the Flames' ACHA Division I team with 32 leather-bound King James Version Bibles inscribed with their names on the covers during a special ceremony after practice on Thursday.

They made the donation in memory of Rick Lowman, the only member of their family to graduate from Liberty before dying of ataxia of the brain in 2007, the year after the LaHaye Ice Center opened on campus. After graduating with a 4.0 grade-point average with a degree in radio and television broadcasting, he served as the team's statistician from its inaugural season in 1985 until 1991.

"That was his nickname from the team, ‘Stats,'" said Brian Lowman, who does carpentry work part-time and builds and races late-model stock cars, such as the one he showcased in the LaHaye Ice Center as a promotion during the on-campus rink's first season in 2005-06. "Me and him were tight, the best of friends, and this brings back good memories of my brother and me. He was a hockey fan and he was their biggest fan and a team player so this was his request."

Rick tried out as a goalie for the Flames' very first team, but didn't make the cut as early stages of the disease affected him physically. His condition worsened over the final 15 years of his life.

"Before he died, he couldn't talk, he couldn't hear, he had no control of his muscles at all," Ray Lowman said. "We brought him right to the end. No matter how sick he was, he wanted to come to the games."

Brian Lowman, who wrestled for one season for the Flames in the late 1970s along with his older brother, Kevin, regularly sat with Rick in the stands when he wasn't standing along the plexiglass beside his brother in a wheelchair.

"The last year, the 2006-07 season, his eyes were going bad to where he couldn't see so I had to explain everything to him, to commentate the game for him," Brian said. "They made Rick an honorary team member that year and when he passed away, the whole team came to his funeral. I was really impressed with a whole bunch of young guys who played hockey Friday night and showed up at 9 a.m. Saturday morning. That told me a lot about their hearts."

"They all showed up to pray for him the night before he died," added Ray, who retired last month after working for Liberty since 1977, first as the only full-time bus mechanic servicing a fleet of 87 school buses, and the last 15 years in Liberty's facilities management department.

"He gave a speech in the dressing room last year," Brian said of Ray. "He told them, ‘I'm 85 years old and I'm out here working. You boys can work hard, too.'"

To reciprocate the love and support the team has shown their family, the Lowmans wanted to inspire the current cast of Flames spiritually with personalized copies of the Bible.

"We thought this would be a good thing to do for the team," Brian said. "Anytime we can do something for Liberty Hockey, we try to. They all thanked us and were grateful that we did that for them and I'm glad. You can tell a person by their response and they really appreciated it."

In 2006, Brian Lowman encouraged Flames goalie Dalton Stoltz, who currently serves as campus pastor of Liberty Baptist Church in Chesapeake, Va., to write a Gospel tract that he published for the team to use as a witnessing tool.

"It takes hockey and the Bible and puts them together so they can understand you work as a team, just like you can in sharing the Gospel," Brian said.

The Lowmans hope Liberty's players take God's Word to heart and use it to grow in wisdom and knowledge so they can share the Good News wherever they go, along the road that leads to the ACHA Division I National Championships in Boston and into the mission field.

"I just told them to make sure they read them, and be strong for the Lord, too," Brian said. "I hope they remember the hockey, but also remember Who brought them through it. That's the most important thing. They can use hockey as a platform when they go out to witness for Christ."