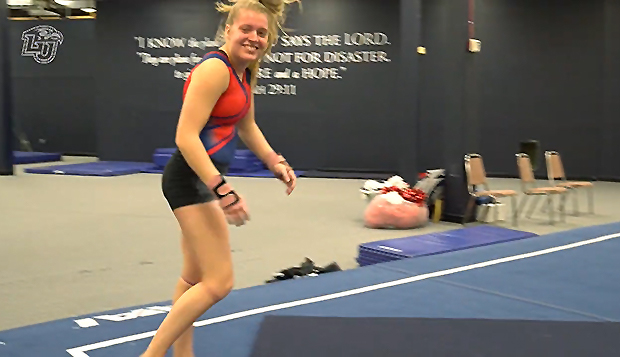 Audrie Pack and her Lady Flames teammates return with great expectations for the Spring 2021 season.

"We had a bunch of four-year athletes, a huge part of our team graduate, and we really didn't know how it would go and it turned out to be a great season cut short (by COVID-19)," Lady Flames Head Coach Tim Kappel said. "It was a very good showing for our freshmen coming in."

Following a third-place debut out of 25 teams at Ohio State and a first-place performance at JMU in February, Kappel was confident his gymnasts were poised to land in the top-10 again at the national competition set for April in Providence, R.I.

"We were looking good in March and I think it would have been a pretty good finish, and a surprising finish," he said. "It was exciting to know that we had a total reboot with a new group. We were obviously really disappointed, as everybody in the country was, to end our season (early). We train to compete. We don't train for fun. There's fun, but the goal is to go out and show everyone what you're doing. It was hard for them."

Kappel said, despite the disappointment, the returning team members have maintained a positive outlook on the future, which will hopefully translate to the enthusiasm among the incoming freshmen.

"If anything, I've noticed the focus and the drive coming back is better than it was," he said. "When you lose that, you realize how much you really miss something and you don't take things for granted. So our returning corps, all of the kids from last year, they're really dialed in. They want to make sure this season counts. They want to make sure they're back here and get everything they can out of this and showing these freshmen, too, ‘Hey, we've got a job to do. Let's go do it.'"

A 5,000-square-foot gymnastics facility in the new Club Sports Training Complex has given the Lady Flames an on-campus training base after previously working out of space in The Plaza shopping center and Kappel's Pure Gymnastics studio in Lynchburg.

"We can't say enough about how much the school has done for us to put that building on campus," Kappel said. "That was a huge investment and (Director of Club Sports Facilities) Chris Lowes and … all of Club Sports worked really hard pulling this thing together. The athletes are ecstatic. They feel like they have a home. It just changed the morale and lifted everybody up so much higher."

He believes that spiritual boost will continue as the team prepares for next week's tryouts and an uncertain schedule in the upcoming season.

"We're super excited," he said. "We'll be looking as strong as we have (in the past) and it will be a fun year. Our core from last year's team were freshmen who built a ton of experience and we brought in three freshmen who are going to contribute right away. We don't have a ton of spots to fill (at tryouts), but if the right person's out there hiding in the wings, the wildcards that can come in and really contribute to the team."