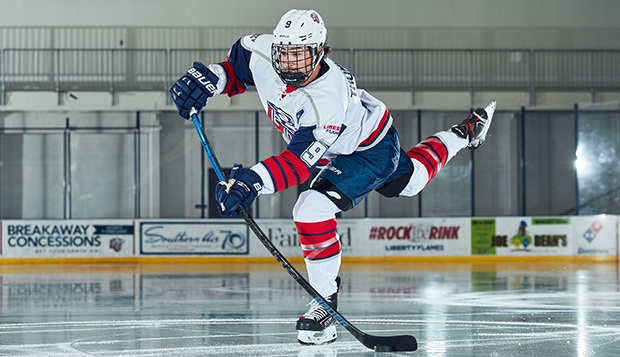 Brock Thompson brings exceptional leadership back to the Flames as an alternate captain. (Photos by Ross Kohl)

A senior season shortened by injury prior to COVID-19 canceling the ACHA National Championships in Texas was not the way Liberty University Division I men's hockey forward and alternate captain Brock Thompson envisioned ending his collegiate career.

Rather than hanging up the skates after completing his B.S. degree in Strategic Communication online in May, Thompson has opted to return for a fifth season of eligibility while beginning his M.A. in Communication.

"It is a great opportunity to continue my education as I explore the next stage of life," he said. "Hockey's definitely coming to an end after this season, so I am focusing on how to finish my hockey career strong before focusing on my professional career. Liberty does a great job of preparing players and students for life after college and I will be able to close my hockey chapter and do a lot of things this year that will help me in my next chapter of life as well."

Throughout the spring semester and well into the summer, which he and his wife, Cadrian, spent in Lynchburg, Thompson rehabilitated from the tibial plateau fracture he sustained below his right knee on Jan. 31, the night of the Flames' annual "Teddy Bear Toss." The injury occurred moments after fans littered the LaHaye Ice Center rink with stuffed animals in the first period of a 6-0 rout of Rhode Island, on a collision in the corner with a Rams defenseman.

"(Club Sports Coordinator of Strength and Conditioning) Chris Kerr and (graduate assistant) Jackson (Lohr) our team's athletic trainer, really helped me get back on my feet and did everything they could to speed up my healing process and they did a great job," Thompson said. "My speed hasn't gotten back yet, but I feel like I've gotten more solid every season since my freshman year, and more confident playing the body. I am feeling really good and am hopeful I can continue that physical play this season."

He will be one of four graduates on this season's roster, along with linemate Quinn Ryan and defensemen Chaydan Lauber and Garrett Nelson.

"I love playing with Quinn," Thompson said of Ryan, who was the best man in his wedding last August. "He's an unbelievable player and he pushes all of us here. The way he works in the offseason is unparalleled. The best part about him is he makes the rest of us better."

Though the Flames graduated 10 players this past spring, Head Coach Kirk Handy has added eight freshmen and transfers with tremendous potential for the fall semester.

"We lost a lot of locker room guys, best friends that I came in with as a freshman," Thompson said. "It is always fun to get new faces and the group we have coming in this year is really solid. We are really hoping to lead the charge for these younger kids and show the culture we've created over these last four years. We want to carry on that legacy and we hope that the group that we're bringing has the opportunity to do that."

Last season, Liberty (33-4) rose to a program-high No. 2 in the ACHA DI rankings, swept top-ranked, previously unbeaten Adrian College on Feb. 21-22 at home, and captured its third ESCHL regular-season and tournament championships in four seasons.

"We're all hungry and motivated to finish where we left off, which we felt was the best team in the nation going into nationals," Thompson said, "We want to pick back up right where we left off."

With the team's tryouts and preseason camp postponed to Sept. 7 due in part to international players being forced to quarantine for 14 days upon arrival on campus, Thompson is not sure when the puck will drop on the Flames' 2020-21 season. They are scheduled to open Sept. 18-19 at home against Indiana University of Pennsylvania (IUP).

"It seems like it changes every day, but our team is going to be prepared for whatever and ready to go whenever that first game is," Thompson said. "That's the culture we are going to create from the beginning. We are not sure what the first semester will look like, but I feel really good about the second half of the season, to get in full gear after the New Year."