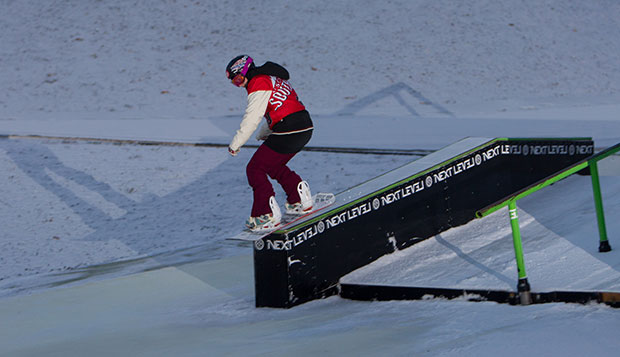 She finished in fourth place out of a field of 52 riders from 17 other schools, nearly sticking a landing of a high-amplitude jump on her second run that would have put her in the top three.

"She was one step off the podium, so that's pretty elite stuff," Liberty head coach Will Scheren said. "She's still all-American. That girl killed it today. She had the eye of the tiger. She went out there and was in fourth place after the first round and said, ‘I'm going to go out and win now.' She went for it and almost got it. She was really close."

Riders performed freestyle maneuvers over a 45-foot jump and 55-foot jump before doing tricks on rails that were 20 feet long.

"I just figured this was my last contest of the year so I might as well go for it," Jones said. "Once you get this far, if you don't push yourself as hard as you can you will regret it."

"I could not be more proud of the way Eden has rode all year or happy for her today," Scheren added. "She has been preparing for this contest since the beginning of the fall semester and it paid off today."

On Thursday night, Liberty skier Tim Steltzer had the opportunity to compete in a big-air exhibition, as his younger brother Jonathan did at last year's nationals in Maine.

"He was selected out of over 160 riders here, which shows he is well enough respected at Liberty," Scheren said. "They take eight kids, four skiers and four snowboarders, based on what the riders say they want. He's out here looking great off the 68-foot jump and his (stunts) off the 55-foot jump look clean and perfect. He's feeling good."

On Friday, the Flames will conclude competition in the men's snowboard slopestyle event at 9 a.m. (11 a.m. EST), with Kevin Hoff, Dave Promnitz, Jesse Spadino, and Brendan Sullivan in the running, before Steltzer competes in the skiing slopestyle held on the same course.

"Everyone's hitting big 55- and 60-foot jumps," Scheren said. "It's rewarding as a coach to see the plan kind of come together. They've been getting for nationals all year and now they're doing it."

The competition was delayed a day after six inches of fresh snowfall slowed the course down earlier in the week. Visit the USCSA Nationals website for live coverage and results.