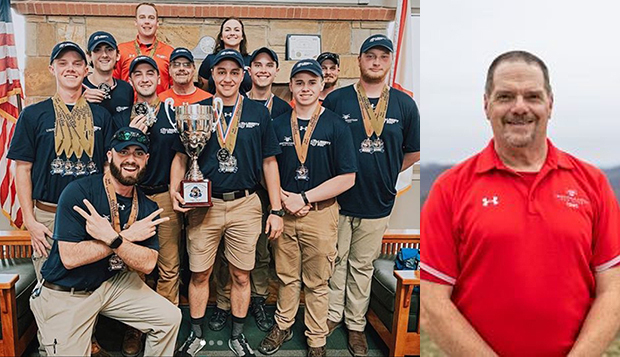 Crawford grew up shooting precision rifles before becoming a marksmanship instructor in the U.S. Army and the Chief Ranger at James River State Park in nearby Appomattox County for 10 years. He has been a coach in various shooting disciplines through 4H and taught Hunter Education courses for most of his adult life.

The Action Shooting team, which combines rifle and pistol target shooting with set targets on a timed course, is one of three different disciplines Liberty competes in, along with shotgun and three-position rifle, training on separate ranges at the LMGC.

"The disciplines are so different in terms of what is required to be good that rarely is there much in the way of crossover," Crawford said of members of the three teams. "In shotgun, you have to shoot from a stationary position at a moving target. In precision rifle, you're not moving, and neither is the target. Action sports has a set group of targets, but you're moving your gun rapidly from target to target, which teaches you good gun control and hand-eye coordination."

The Flames captured four national championships at the March 12-14 Scholastic Action Shooting Program (SASP) Collegiate National Championships in Talladega, Ala., just before COVID-19 shut down most sporting events across the United States.

"That was a big deal for us because we really had just made a concerted effort starting in January, so we only had two months to get the team honed in the direction we wanted to," Crawford said.

"When I was shooting competitively, I've been at the top before and it's not really the best place to be," said Crawford, who shot precision rifle until he retired from competitive shooting in 1998. "As the defending champion, now everybody expects you to shoot well and everybody's trying to knock you off. Last year, they didn't have any real high expectations. Now, we're expected to win and to me that will be the challenge."

Crawford plans to keep a roster of 10-12 team members, selecting two squads (A and B) of four shooters to the travel team based on their times at tryouts in September.

The Flames graduated two of their top shooters — Sam Stover and T.J. McFarland — but return their fastest, rising junior Sam Verdoorn, as well as rising senior sharpshooter Andersen Bennett and rising junior Christian Morgan, who was one of the most improved in the short time he was on the team last season. Connelly Weems, who placed second in the female divisions of both the Pistol Caliber Carbine and Rimfire Rifle Optic Sights events at nationals, will rejoin the team as a graduate student for the spring semester.

"Two of our strongest recruits this year are females, including Jessica Doiron from North Carolina, a USPSA junior national champion last year," Crawford said. "The other, Kathryn Allen from Texas, placed fourth out of 98 shooters at the SASP nationals, so she is very, very, very strong."

He is hoping to host a regional competition at Liberty in late October, drawing 25 four-shooter squads from Delaware, Maryland, North Carolina, South Carolina, West Virginia, and Virginia, in preparation for SASP nationals in March.