Women's Ultimate players eager to pick up where they left off 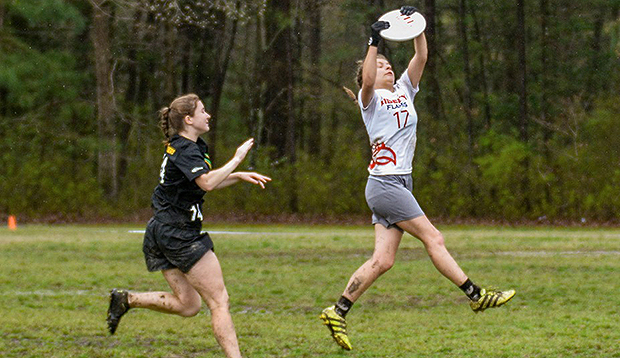 Senior captain Bethany Fowle leaps to make a catch in last year's Virginia Conference Championships. Fowle will return for a fifth season of eligibility this fall.

Liberty University women's Ultimate Head Coach Jonathan Mast and Assistant Coach Ashley Mast have managed to put a positive spin on a spring season that was cut short by COVID-19.

The Lady Flames missed the opportunity to qualify for their seventh consecutive Mid-Atlantic Regional Tournament when the Virginia Conference Championships, scheduled at JMU in Harrisonburg, Va., in mid-April, were canceled. But they went out as champions by capturing the March Mashup tournament title in Axton, Va.

"To go out on a win was a good way to end the season, beating the only team we had lost to in the final match," Ashley Mast said. "The girls really started to come together in terms of how they were playing. They were sharpening their skills, their fundamentals were getting better, we were really becoming a cohesive unit. We really felt like they were showing their potential as a team and we won the way we wanted to win."

"It was disheartening not be able to even get the chance to test their mettle and let them see the fruits of all of their labors," Jonathan Mast added. "They were still hungry to play going into the summer."

The coaching couple has taken measures to keep the Lady Flames focused on developing their games over the offseason and looking forward to a 2020-21 season that has the potential to be one of the program's best yet. Besides returning the vast majority of its veteran players, a fifth-year eligibility extension due to COVID-19 will allow senior team captain Bethany Fowle to return for one more year.

"They're all keeping each other accountable, making sure they're doing their workouts, trying to get stronger mentally, and increasing the work load that they're doing through fitness training coming into the fall," Jonathan Mast said. "I think that we've done a pretty good job of managing what we could. Our girls are still hungry to play and make the best of it … and we're getting a bunch of new recruits with a lot of experience, which is a rarity in our sport."