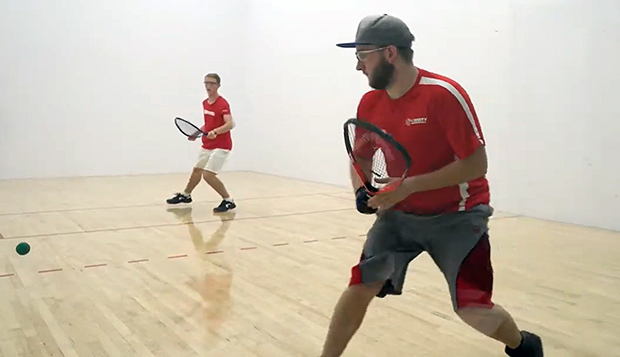 Seth Jordan ('20) eyes a backhand in the corner during a practice match against Flames teammate Trevor Melton, a rising junior, at the LaHaye Recreation and Fitness Center courts.

In this interview with Club Sports Director of Video & Media Patrick Strawn, Liberty University racquetball Head Coach Danny Rodriguez looks back on the Flames' 2019-20 season and ahead to this fall semester, when he and his coaching staff will recruit prospective players of all abilities and train them to compete in the Mid-Atlantic Collegiate Racquetball Conference (MACRC).

Liberty completed the spring season ranked third out of 16 teams in the MACRC, based on its regular-season tournament schedule that ended in late February. The Flames and Lady Flames planned to send a group to the March 25-28 USA Racquetball Collegiate National Championships in Baton Rouge, La., but that tournament was canceled by COVID-19.

"We had a very young team, and they did pretty well for being young," Rodriguez said. "A lot of those players are coming back. We had mostly women graduate, so we only have three women coming back out of a team of eight and will be looking for a lot of women to join and help us out (this fall)."

He relies on his players to be his best recruiters, and tries to foster an atmosphere that emphasizes relationships over competitive talent on the court.

"This team has developed a family environment," Rodriguez said. "They take everybody under their wing and … If someone sees someone struggling with a stroke, someone's always willing to jump in there and help them with that stroke. We don't push competition. We push enjoyment of the game. We always tell them, ‘If you're having fun, that's all we care about. Competition comes later. You're going to get better as you go along, and you'll see the improvement.'"

He and Assistant Coach Shawn Furman focus on instilling fundamental skills of the game first before introducing tactical approaches to winning points.

"We teach them all of the basic strokes, how to hit a down-the-line shot, how to hit a backhand or forehand, how to hold your racquet properly with a forehand or a backhand grip, how to keep your eye on the ball," Rodriguez said. "Once they learn those basics, they can develop their own game."

He believes enjoyment of the sport leads to successful strategies through persistent practice.

"As long as the students are staying active and excited about playing the game, I don't see us having a problem," Rodriguez said. "We always find the right students that are committed to playing racquetball and they enjoy the sport."