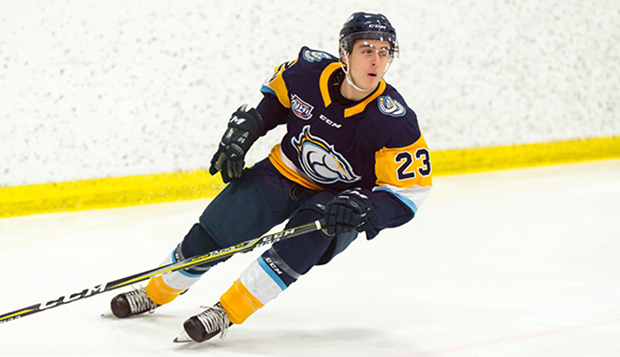 Kris Bladen played forward for the Calgary Mustangs of the Alberta Junior Hockey League in the 2018-19 season.

Liberty University ACHA Division I men's hockey Head Coach Kirk Handy added one more forward to an extremely deep and talented attack on Tuesday with the commitment of Kris Bladen.

"We are super excited to add Kris in the fall," Handy said. "He's a guy who will come in here and really be an excellent fit for the mission we have of Training Champions for Christ, both on and off the ice. From an on-ice perspective, he will be able to help us out on the offensive side of things. He's got good speed, and he will blend in well with the other guys we're bringing in as well."

Bladen, who is 5-feet, 10-inches tall and weighs 170 pounds, grew up with the siblings of rising senior forward Cole Gammer's wife, Julie Richards, and has played against rising sophomore forward Brett Gammer in Edmonton.

"Brett and Cole both reached out to Kirk to put me in touch with him, and I am really excited about the opportunity to contribute to the team's success and just make the biggest impact I can right away while learning from the older guys," Bladen said. "I am pretty adaptable as a player, and I am really excited to get down there and to get to know all of them and find that chemistry."

The son of parents who serve as pastors and provide community service through the Salvation Army in Lethbridge, Alberta, Bladen plans to study in the School of Business before adding an environmental law degree.

"I'm really grateful for the opportunity to pursue my academic and hockey careers at a place where I can become a better man of God," he said. "It is very humbling to play with them and to play at such a prestigious program. I haven't been on campus yet, but I've heard the facilities are first-class and Liberty's fans are crazy from what I've seen online. I am really excited to play for such great fans."

Born in Saskatchewan, Bladen moved to Edmonton, Alberta, when he was 7 and picked up hockey by following in the footsteps of family members who played the sport.

"When you grow up in Canada, hockey is a part of life," he said. "My dad and uncles all played and we watched (NHL) hockey together on Saturday nights. Me and my brother would play road hockey outside. We were both very competitive people, so we always pushed each other."

In his pre-teens, Bladen traveled to Europe with his Canadian Explorers AAA 11-12-year-old team for a two-week hockey tournament at rinks in Austria, Czech Republic, Germany, Italy, and Switzerland.

"I went with my dad and uncle and everyone loved it," he said.

Since joining the Canadian Junior hockey ranks, Bladen has traveled through much of Western Canada with the Alberta and Manitoba Junior Hockey Leagues, rising through the ranks to serve as assistant captain. He recently completed one of his most successful seasons, scoring 17 goals and distributing eight assists in 45 games with the MJHL's Waywayseecappo Wolverines.

"I really found the offensive side of my game," said Bladen, who models his playing style after that of Patrice Bergeron, a veteran center for the Boston Bruins. "It's been a dream of mine to play university hockey in the United States for a long time now, and I'm grateful for the opportunity."

He considers himself a 200-foot forward with the ability to contribute on both ends of the ice, as evidenced by the fact that he played on both the power play and penalty kill units during his Juniors career.

"I feel comfortable in any situation I am put in and have really developed my offensive game by putting the puck in the net and creating offensive opportunities, as well as shutting down other teams' top lines (on the defensive end)," Bladen said.

This summer, to prepare for his freshman season with the Flames, he has intensified his off-ice conditioning.

"I'm in the gym with my personal trainer every morning, skating with my skills coaches," said Bladen, who also works at a golf course, where he can pursue one of his two off-ice passions, with the other being fishing.