Foundation grant to support Liberty's rifle team as it travels 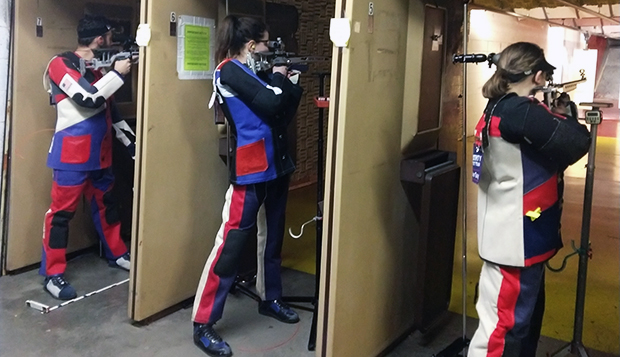 For the second year in a row, Liberty University's shooting sports program has received a $5,000 grant from the Houston Safari Club Foundation (HSCF) to help cover travel expenses to competitions as far away as Michigan, Texas, Alabama, and Georgia.

HSCF has awarded over $4 million in grants to protect and promote the future of hunting, shooting sports, education, conservation, habitat, and wildlife. It has also provided more than 500 academic scholarships totaling over $2.1 million.

Liberty President Jerry Falwell and his wife, Becki, met HSCF Treasurer John Pepper and his wife, Melanie, at an event in Montana in 2018, and the visit led to a partnership with Liberty. The Peppers suggested applying for one of the grants. After an exhaustive application process, the HSCF Board was impressed with Liberty's rapidly developing shooting sports teams, headquartered at the Liberty Mountain Gun Club, and all that the university stands for as a faith-based program.

This year, the funding will go to the rifle team, which also earned an individual title, by then-freshman sharpshooter Mitchell Feaga, as a first-year program at the National Rifle Association (NRA) National Championships in Fort Benning, Ga., in spring 2019. (The national event last semester was canceled due to COVID-19.)

The rifle team competed as a first-year member in the Western Intercollegiate Rifle Conference (WIRC) Championships in Michigan in February, earning first- and second-place showings in the air rifle and smallbore regular-season and championship competitions.

"This grant will be a very big benefit for us to travel to our national competitions," said Head Coach Marlene Gray, the WIRC Air Rifle Coach of the Year. "Last year, we were only able to take two trips — to Charlottesville, Va., and Fort Benning, Ga., to compete in sectionals and NRA Nationals. This year, we were able to have a full season of involvement with the Western Intercollegiate Rifle Conference before starting to travel in February for sectionals."

Gray is already planning fall semester tryouts for the co-ed squad in late August and early September. "We are looking forward to working with the students again on campus," she said.

The 2019-20 season was an extremely successful one for all three of Liberty's men's and women's shooting sports programs. The Action Shooting team captured four national championships at the Scholastic Action Shooting Program (SASP) Collegiate National Championships in Talladega, Ala., in March.