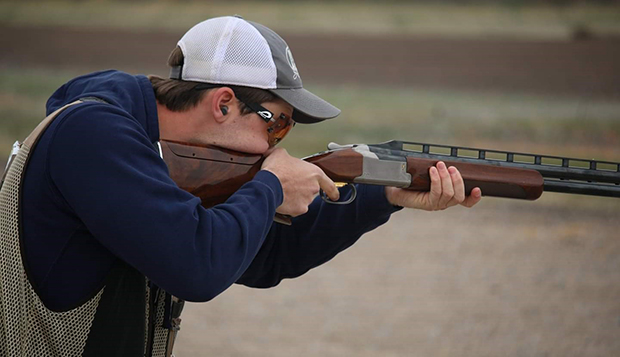 Nathan Brandmeyer, an American Trap specialist from Iowa who has enjoyed a meteoric rise in the sport, will continue his shooting career on Liberty University's shotgun team this fall.

Since first trying the event in eighth grade, and developing under the instruction of his father, Ankeny High School Head Coach Larry Brandmeyer, and Scholastic Clay Target Program (SCTP) Head Coach Terri DeWitt, the former Olympian and International Bunker Coach, he has excelled in the sport.

"One of my good friends shot and was really good at it so I tried my hand at it and picked it up fast," said Brandmeyer, who placed in the top five in the state after just three months of training, following a four-way shootoff under the lights in front of an Iowa State Meet record crowd. "It took off from there and I started taking it seriously my sophomore year. I was getting higher scores and winning more competitions and I decided this is what I wanted to do."

As his high school career progressed, he earned All-State recognition for Iowa the past two seasons and served as All-State team captain in 2018. In both his sophomore and junior seasons, he shot a perfect 200 in state league competition to place in the top 10 out of more than 3,500 contestants in both the doubles and handicap divisions. This year's event was canceled by COVID-19, preventing Brandmeyer from a shot at history.

"I could have been the only Iowan to make the All-State team all three years I competed," he said, while acknowledging he has much higher aspirations in the sport. "The dream of all dreams is to compete in the Olympics and represent my country at the highest level in the sport. Shorter-range goals include winning an ACUI national championship with my team at Liberty and to shoot a perfect score and making the SCTP and USA Shooting Junior National teams."

After visiting Liberty for a College For A Weekend (CFAW) event and shooting with the shotgun team at the Liberty Mountain Gun Club range, Brandmeyer is looking forward to expanding his horizons in the sport at one of only two collegiate facilities of its kind in the United States.

"That is one of the main reasons I decided to come to Liberty," he said. "I was looking forward to joining a program that had both International and American fields that I can train on. The facilities at Liberty are top-notch and it is very unique that the team has that practically to itself."

Brandmeyer is hopeful he can make a positive impact on Liberty's third-year program as the Flames and Lady Flames sharpen one another in the sport.

"That's what a team is," he said. "You learn from each other and help each other out, especially in a sport like this where it's 90 percent mental."

Brandmeyer plans to pursue a major in government with a specialization in politics and policy and a minor in criminal justice.

"I'm thinking the FBI or CIA route," he said.

This summer, Brandmeyer will compete for the third year in a row at the SCTP Nationals, in Marengo, Ohio, held over a two-week period in July. At the 2019 event, he placed in the top 20 across all American Trap disciplines of single, double, and handicap. 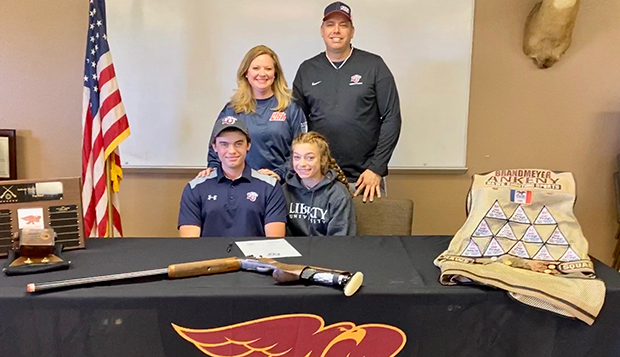 Surrounded by family, Brandmeyer signs his letter-of-intent to compete for Liberty's shotgun team.