Flames to open spring 2021 at NCAA Division I Long Island 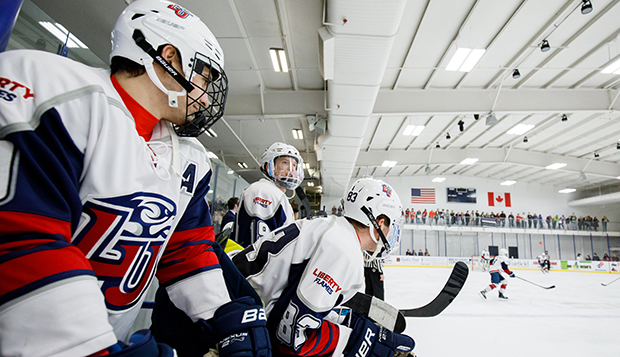 For the third time in 10 years, Liberty University's ACHA Division I men's hockey team will face an NCAA Division I program, elevating the level of competition on its 2020-21 schedule. The Flames, who ended the 2019-20 season ranked second in ACHA Division I, will open the spring semester on Friday, Jan. 15, against Long Island University, which is debuting at the highest level of collegiate hockey in the United States.

"It is super exiting," Flames Head Coach Kirk Handy said. "Long Island has a brand new program and that will be a really good game for us. It is a great opportunity for our team to see how we stack up against an NCAA opponent."

The location of the game has yet to be determined as LIU, based in Brooklyn, N.Y., does not have a home rink. Liberty will resume ACHA play the same weekend, Jan. 16-17, by taking on ESCHL rival Stony Brook in a two-game series at The Rinx in Hauppauge, N.Y., also located on Long Island. The Flames shut out the Seawolves 4-0 on March 8 to capture their third ESCHL Tournament title in four seasons.

Those are the last two programs to join the NCAA DI ranks before LIU's addition this fall.

Handy said the Flames' coaching staff's relationship with ASU Head Coach Greg Powers was a key connection in setting up the contest.

"We played Arizona State team for a long time when it was in ACHA Division I and Greg talked to Brett Riley, the new coach at LIU, about the opportunity to play us, and we are appreciative of that," he said.

Long Island will compete as an independent this year, playing several top NCAA Division I programs. Riley, who previously coached at NCAA DIII Wilkes (Pa.) University and served as an assistant coach this past season at NCAA DI Colgate (N.Y.) University.

"It is a major transition and he's recruiting hard right now," Handy said.

The Flames will make their 2020-21 season debut on Sept. 18 against Indiana University of Pennsylvania at the LaHaye Ice Center.