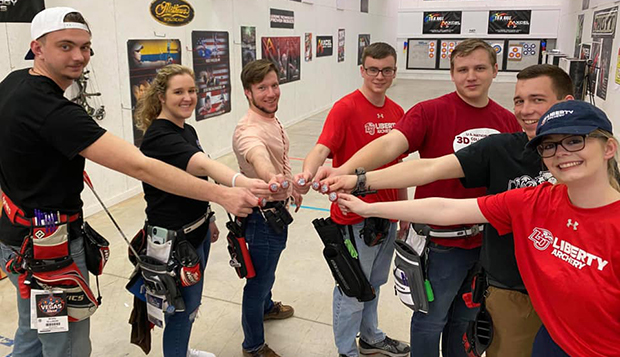 USA Archery recently named Liberty University rising junior Connor Rothermel as its All-Around Men's Olympic Recurve Archer of the Year, based on his second- and seventh-place showings at the two national championship events held in 2019-20.

Rothermel, a civil engineering major from northern Pennsylvania, finished runner-up at the USA Archery 3D Outdoor National Championships in Alabama in early October. He followed that up with a seventh-place performance out of more than 130 archers in his division at the Feb. 29-March 1 regional shoot for the USA Archery Indoor National Championships. The USA Archery Collegiate Target Nationals, originally set for May 14-17 in Chula Vista, Calif., near San Diego, was canceled due to COVID-19 restrictions.

His nine points for the two events beat out the second-place contestant who totaled 15. He was one of eight USA Archery All-Around Archers of the Year — four men and four women in bowhunter, barebow, compound, and recurve.

"He is the first All-American Liberty has had since joining USA Archery, and literally had the best record in the country this year," Flames Head Coach Ben Summers said, noting the top 10 archers in the nation in each event earn All-America status.

Rothermel also finished fourth at a tournament held in conjunction with the in Lancaster (Pa.) Archery Classic, even after missing the target with one shot.

Other encouraging news for the program is the commitment of three incoming archers for the fall semester, including Natasha Leininger, one of the best women's Olympic recurve archers in Texas, where she won a state championship tournament.

"She is a great archer and a great person, too," Summers said, noting that she has personally gathered or packed 10,000 shoeboxes for Samaritan's Purse's Operation Christmas Child program and is planning to get involved in the club at Liberty.

Dylan Pickenpaugh, a men's compound and bowhunter who placed third at the competition in Lancaster, where Summers noticed him wearing a Liberty sweatshirt, is another incoming recruit along with Kalee Pino, who shoots multiple disciplines in Virginia's chapter of the Junior Olympic Archery Development  program.

He anticipates three 2021 graduates of Liberty Christian Academy joining the team next fall and as many as 20 the following year.

"LCA has an incredibly good archery team," said Summers, who served as an assistant coach there for three years and has two children on the team.

This summer, a few of them are planning to compete in the July 25-26 3D Archery competition that he will direct on the outdoor range at the Liberty Mountain Gun Club in conjunction with the Commonwealth Games, sponsored by Liberty.