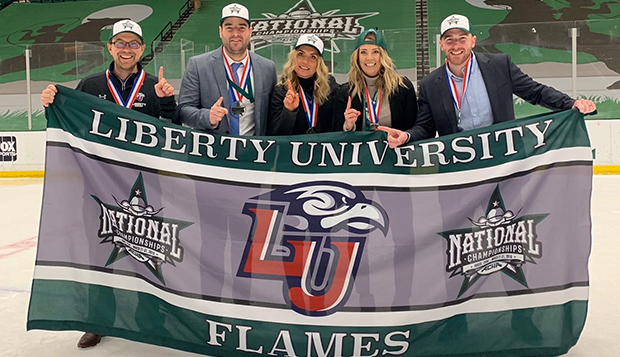 Longtime Liberty University ACHA Division I women's hockey Assistant Coach Josh Graham will succeed Jared Smith as Head Coach of the Flames' ACHA DIII men's hockey team starting this summer. Smith stepped down in February following his second season at the helm after he underwent a job change and his wife, Kimberly, had their first child.

Graham, who graduated from Liberty with a B.A. in Sport Management in 2010 and an M.S. in Sport Administration in 2012, served as an Assistant Coach under Paul Bloomfield from 2008-12 before returning home to Calgary, Alberta, Canada, from 2012-17. He spent four seasons coaching in the Alberta Junior Female Hockey League (AJFHL), his last three at the helm, advancing to the championship game in 2017.

He returned to Lynchburg in Fall 2017 and served as the Video Coach under DI women's Head Coach Chris Lowes for the past two seasons while pursuing a Master of Divinity in Biblical Studies. He will continue to work as Coordinator of the Pro Shop located in the LaHaye Ice Center, home of all five of Liberty's hockey teams.

"It is a great time to come into the men's program, after spending basically seven years on the women's  side," said Graham, 34, who has coached hockey since he was 18. "To be a head coach at Liberty, there is no place I'd rather start. I am really excited to have this opportunity and to get going for next year."

When Liberty launched its DII men's squad in 2006, Graham was beat out for a goalie roster spot by Rett McGibbon, who went on to have two head coaching stints with the DIII team and still serves as an anchor for Liberty Flames Sports Network (LFSN) and the voice of the hockey program.

"I didn't make the team, but that opened up a coaching opportunity with the women's DI team and the rest is history," said Graham, who served in various roles with the Lady Flames — from administrator, statistician, and social media strategist to assistant coach, goalie coach, and video coach.

Before officially debuting as DIII men's head coach on July 1, Graham will help the men's DI and DII coaches evaluate talent at the annual Flames Hockey Prospect Camp, rescheduled for June 18-19 due to COVID-19.

"The DIII team only graduated three guys, but (a few) guys might move up to the DII team this year," he said. "Once I see the camp, I'll have a better understanding of what kind of talent there is coming in. With a strong incoming freshmen class, there is a potential that higher-end guys could get cut from the DI and DII teams. We'll have to wait for tryouts (in August) to see what we've got."

He said there will be a learning curve in his transition to coaching the men's game, but he is prepared for the task at hand.

"One of the main differences is going to be the aggression level and the physicality of the game," Graham said. "Guys are just more inherently physical and coaching them to master controlled aggression will be a great challenge. It will be fun to light the fire for them and keep them motivated by making practices fun and competitive."

As a former goalie, he will bring a more defensive-minded coaching strategy, as he did while working in tandem with Lowes on the DI women's team, which allowed only 26 goals in 28 games this past season.

Graham is most looking forward to serving in a sort of pastoral role to help his players grow spiritually.

"I am excited to share the biblical knowledge I've been learning over the past three years and to be a mentor, to sharpen spiritually those guys who are believers, and, for others who are questioning, to give them answers and help them understand what the Christian faith is all about," he said. "Discipleship and mentoring the guys will definitely part of the team culture."

While Liberty's DI and DII men's and women's teams have both experienced tremendous on-ice success in recent seasons — with all four qualifying for the March 19-29 ACHA National Championships in Texas, which were canceled — the DIII men's squad has been moving up the ladder in its respective regional and national rankings, finishing 27-14-2 the past two seasons under Smith.

"One of my primary goals is to get the DIII team to the same level (as the DI and DII teams) while building on what Rett and Jared have accomplished," Graham said. "They've put so much time and effort into the team and because of all of their hard work, I feel we are in a good spot to do something special this year."

The team will again compete in the Atlantic Coast Collegiate Hockey League (ACCHL), but it has moved from the South to the Atlantic Region, which will be more competitive and cost effective for travel. The Flames will have eight home and eight road series for a 35-game schedule, including showcases in Florida over Fall Break and Ohio in the spring, before hosting the ACCHL tournament.

"We want to be ranked in the top five in our region to give ourselves a chance to punch a ticket to (ACHA) National Championships in Boston this year," Graham said.

"That's always everybody's goal," added Club Sports Senior Associate Athletic Director Jeff Boettger, who also serves as Associate Head Coach of the DI men's hockey team. "At the end of the day, the bigger part is building character into these young men, so that whether in success or failure they are class acts, godly people who want to impact those around them with God's love. Josh fits the character and the vision and the mantra of Training Champions for Christ."