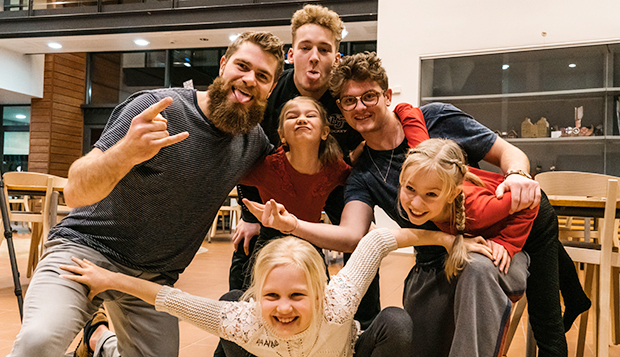 Liberty University's ACHA Division I men's hockey team started the spring 2020 semester with a ministry outreach to Helsinki, Finland from Jan. 2-10. The experience set the Flames on fire spiritually and helped prepare them for the trials they would endure in the second half of the season, cut short by COVID-19.

"It was good for us even as a hockey team to go on a trip and spend some time together before coming back to school," senior defenseman Jacob Fricks said in January. "We had a chance to build the community that we had on the team before we left and continue it into the rest of the season."

"Without a shadow of a doubt, it was one of those trips where you sense the presence of the Lord, that the Holy Spirit had gone before us," Club Sports Ministry Director Brian Davidson added. "It had a really good ministry rhythm and we had opportunities to share the Gospel while putting on clinics and going into schools and churches. As we ministered to others, I felt that God was ministering to us. It was so exciting to see God at work in and through our guys."

The immersion trip helped draw players out of their comfort zones as they engaged with people in a predominantly secular culture.

"In Finland, people just didn't understand how you could be a Christian and be a hockey player," Liberty Associate Head Coach Jeff Boettger said. "The opportunity for us to go there and say, ‘Hey, we're a Christian hockey team,' that alone would just open up doors."

Fricks said it was a challenge at times to break down walls, but once they did, it led to fresh perspectives for both the players and those they witnessed to. That was particularly true at Kids' Action Nights at the church of local Operation Mobilization missionary and Pastor Dave Pike.

"A lot of people in Finnish culture don't share their problems; they keep them to themselves," Fricks said. "As the body of Christ, we are supposed to live in community with each other. That's why Christianity is so cool. We are called to be able to talk to other people about our problems and walk through Christianity together as a body."

Boettger, who is from Canada and played a season of professional hockey in Germany, led the Flames on a previous Christmas break trip to Sweden in 2007 and spring break outreaches to Southern Russia in 2009, Latvia in 2013, and East Asia in 2016. He believes the experience in Finland was life-changing for all involved.

"Some guys are going to be more proactive now," he said. "It's stirred that up, being in prayer for the team. It was a great cultural opportunity and a great spiritual opportunity for the players to get out of their comfort zones and serve kids, serve teachers, serve athletes, and be challenged to speak, to share their stories as they were allowed to."

He said the team's biggest impact may have been in the community of Hämeenlinna, an hour's drive north of Helsinki, where Pike is planting another church and the team played its only game against an HPK U-18 team.

"That provided a good forum for a friendly match and created a connection with the hockey community that they would not have had before," Boettger said. "They all stuck around and joined us for the prayer, so that was really special. It provided the encouragement and a new vision for the fans who were from the church to see how hockey or sports in general can be used to impact the community."