Mininno leaving twin brother at Drexel to wrestle for Flames 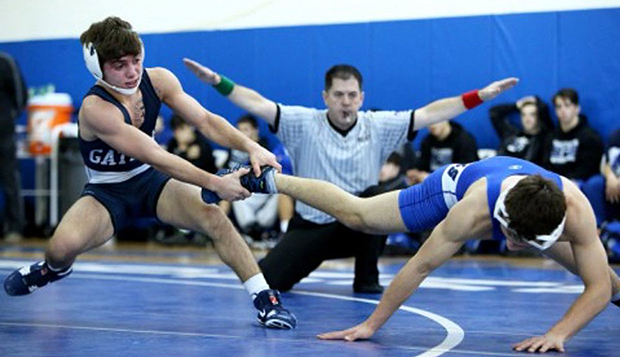 Mininno, who graduated from Gateway Regional High School in Woodbury Heights, N.J., as the all-time leader in victories at 153-9, grew up in the same church as Liberty Head Coach Jesse Castro, who coached wrestling at nearby Kingsway (N.J.) Regional High School from the late 1990s to the early 2000s.

"I have known Coach Castro for a long time and our families are very close," said Mininno, who attended at least five week-long Liberty summer wrestling camps, starting at age 10 and through his teenage years. "I have always thought of Coach Castro as a mentor to me. He has established a powerhouse program and it is an honor to be a part of it."

Memories of how Castro ran the program with a spiritual emphasis, even in his summer camps, resonated with him and eventually led to his enrollment at Liberty.

"The first time I stepped foot on the campus, I had so much fun that week and I not only learned wrestling technique, but I was able to see how God impacted the lives of the coaches and athletes," Mininno said. "It was amazing to hear the testimonies and stories of each and every athlete and the blessings that God had brought them. While my time at Drexel has been amazing, I believe that God has been calling me to grow my faith even more and attend Liberty University."

At 5-feet tall, Minnino and his identical twin brother, Antonio, who had an identical record at a different weight class in high school, are diminutive dynamos. Dante Mininno boasted an astounding 107-0 career dual meet record at Gateway, where he was the first four-time district champion in school history, as well as a three-time New Jersey state tournament place-winner and a National High School Coaches Association (NHSCA) All-American as a sophomore. He was also a New Jersey freestyle state champion and competed in freestyle wrestling in Australia and New Zealand.

Both brothers looked at attending Liberty right out of high school.

"Liberty was on both of their radars at the beginning, because of the relationship with coach Castro," Williamson said.

However, Castro encouraged them to pursue their dreams at the NCAA Division I level and both landed wrestling scholarships at Drexel, where they contended for the same starting spot at 125 pounds.

"As twins, they are close and have trained together their whole life, and had aspirations to do it in college," Castro said. "They are both Division I caliber kids, who have a good training work ethic and have done a lot of offseason wrestling."

Now, seeing that Antonio has the upper hand on the 125-pound starting spot after only filling in for him when he was injured, Dante is finally separating from his twin and following the Lord's lead to Liberty.

He said while their personalities are different, with Dante more of an introvert and Antonio an extrovert, competing against his brother on the mat was always like wrestling himself.

"We know each other's style so well that when we clash, it's like wrestling in a mirror," Dante said. "We are both very competitive and never like to lose, in general, but we hate losing to each other, especially."

He is confident that he and other incoming lightweight recruits from Virginia can help the Flames continue their run of success in the NCWA ranks and against NCAA opponents in open tournaments.

"Liberty's got a bunch of guys who have proven they can win at the top levels," Mininno said. "I'm hoping to make an immediate impact and help out any way that I can to help propel the program to even greater heights.

"Coach Castro holds his team to a high standard and I want to go in there with a mentality that I can dominate right away," he added. "That's my goal. I have high goals and expectations for myself that will never change, in wrestling as well as academically."

He said wrestling has helped him achieve his academic goals and raise his standards for future career success.

"Athletics has helped me work hard and stay motivated and grounded in my studies," said Mininno, who is changing his major from nursing at Drexel to business administration — health care management to satisfy his desire to serve in the medical field and meet a growing need in the market and may take some sport management classes. "Ideally, I would like to work in the professional or collegiate sports realm, working with physical trainers and sports doctors."